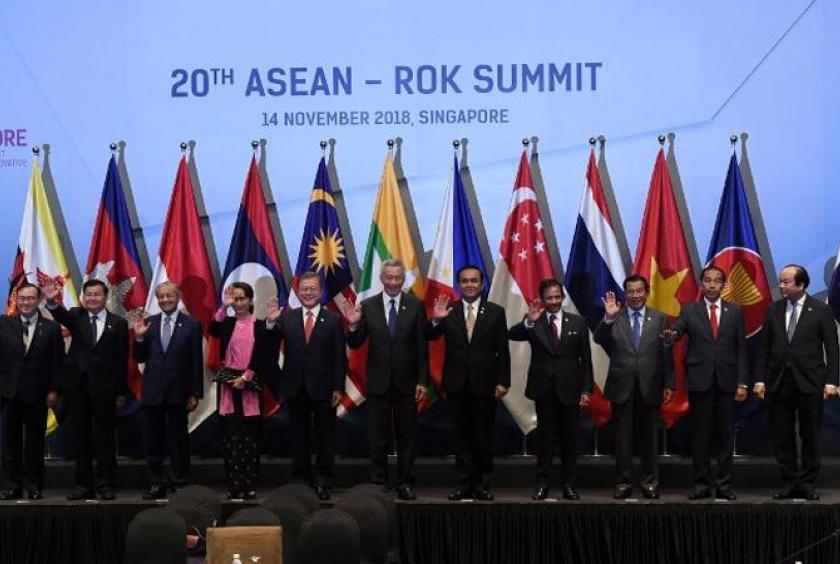 For three days from Nov 25-27 in the port city of Busan, South Korean President Moon Jae-in will have a rare opportunity that eluded his predecessors — to set in cast iron the future and shape of South Korean-Asean and Mekong riparian country relations amid the ever-changing regional and international environment.

Over the past two years, Mr Moon has demonstrated for all the Asean leaders to see that he is serious about pursuing “a reliable and trusting partnership” with the grouping in a holistic manner, bringing their peoples and prosperity together, underpinned by a peaceful environment.

This is a tall order for a middle-power country that used to focus only on the Korean Peninsula. Seoul is now trying to diversify its strategic objectives to involve the mainland and maritime Southeast Asian countries and India. Under Mr Moon’s New Southern Policy (NSP), South Korea aims to strengthen ties with the developing countries in the southern hemisphere that are considered the economic growth engine.

It is fair to say that Mr Moon’s personal conviction and persistence have already made a difference in Seoul’s overall approach to Asean. At the very least, he fulfilled his promise to visit all 10 Asean countries within 23 months of taking office. He also succeeded in highlighting South Korea’s unique characteristic as a non-hegemonic and non-aggressive nation in the region.

“Korea and Asean have a healthy relationship without any historical baggage,” said Ambassador Kim Young-sam, former secretary-general of the Asean-Korea Centre.

Under Mr Moon’s direction, all statistics related to Asean-South Korean ties are on an upward trend. For instance, the number of infrastructure projects invested in by South Korean companies in Asean is up, worth more than 11 billion last year, more than all of the Middle East’s projects put together. Approximately 11.7 million tourists from South Korea and Asean travelled to the other country last year.

In addition, South Korea ranked as Asean’s No.2 trading partner, reaching US$160 billion in direct investment. After the Busan summits, officials on both sides hope for a surge in tourism and trade. They view the continued popularity of the Korean Wave, Hallyu, such as K-pop, K-food, K-beauty as representing potent soft power.

That helps explain why one of the NSP’s objectives is to raise Asean’s status as a global player that is on par with other major powers — the US, China, Russia and Japan — even though at this juncture that goal is a bit far-fetched, as Asean is still a light-weight player. But within the next decade, the Asean community — with its large population of 655 million, over 100 million more than the EU — will become one of the world’s big five economies and subsequently a global player.

His predecessors were not lucky enough to witness the dramatic shift currently taking place in the region, which has prompted South Korea to take a different, proactive route. First and foremost, it was Mr Moon’s unwavering support of the Asean role in the peace process on the Korean Peninsula that strengthened the Asean-South Korea friendship, a far cry from their ties under previous South Korean administrations.

For decades, the perceived role of Asean on the Korean Peninsula was confined to the whip of Seoul policymakers, whoever it might be, seeking to criticise Pyongyang’s longstanding nuclearisation. Support for South Korea’s position on the peninsula and condemnation of North Korea’s nuclear ambitions was the only barometer of the Asean-South Korea friendship. At the time, any issue beyond North Korea was a non-starter.

Therefore, it was left to the South Korean private sector to pave the way and stay at the forefront, raising the bar of Asean-South Korea relations until it was among the top five dialogue partners of Asean. Gradually but steadily the Seoul government has taken the lead in Asean-South Korea ties with cooperation from the private sector and civil society organisations.

As a latecomer to the Asean Plus Three and Mekong circuit, South Korea is moving at full throttle to boost ties with Asean. In 2017, the Asean Cultural House, the only one of its kind in East Asia, was opened after three years of construction. In August 2018, Seoul set up the Presidential Committee on New Southern Policy and in May 2019, set up the Asean and Southeast Asian Bureau– aimed at institutionalising the NSP in the conduct of South Korea’s foreign policy.

South Korea’s Ambassador to Asean, Lim Sung-nam, was a former vice foreign minister, the most senior official to serve in this position in Jakarta. All these efforts are testimony to South Korea’s desire to ensure that this new policy toward Asean and India will remain intact in the future, regardless of a new government.

The NSP has outlined 16 policy tasks to achieve, based on the principles of people, peace and prosperity. These guidelines provide a panoramic view of South Korean foreign policy toward the region. There were 57 regional projects that could be implemented. In particular, Seoul would like to encourage Asean to take an active role in the Korean Peninsula, including the peace process, denuclearisation and integrating North Korea into regional affairs.

Undoubtedly, Asean members would be the most suitable to serve as a “sherpa” for Pyongyang as it climbs the “Everest” of economic reforms. Indeed Vietnam’s economic model is an ideal one, given the country’s unprecedented economic growth without political disruption.

During his visit to Vietnam for the second Trump-Kim summit in February, North Korean leader Kim Jong-un learned firsthand that economic reforms would not necessarily bring about regime change, as he had much feared. Instead, it has strengthened communist rule as Vietnam has expanded diplomatic ties with Western trading partners.

After the Busan summits, Asean-South Korea ties will have a clear pathway to move forward in terms of commitments — financial, personal and institutional. Under the current environment of global polarisation and disruption between superpowers, Asean and South Korea must work closely together to navigate the high tides without any prejudice.