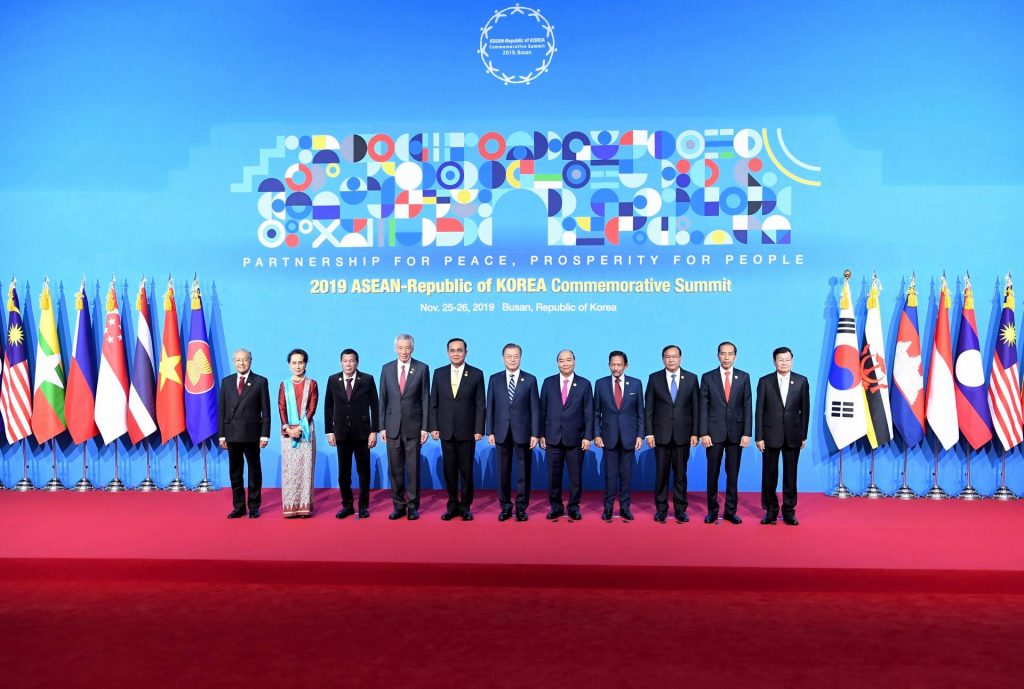 South Korea — South Korea and the 10 member countries of the Association of Southeast Asian Nations (ASEAN) strived for free trade and anti-protectionism during their special summit that ran for two days through Tuesday in the South Korean southern port city of Busan.

“Amid growing concerns over protectionism around the world, we reaffirmed that free trade is the way leading to common prosperity,” South Korean President Moon Jae-in said in a joint press conference with Thai Prime Minister Prayut Chan-o-cha after wrapping up the ASEAN-ROK Commemorative Summit.

“(South) Korea and ASEAN will build on free trade to move toward an innovative community of mutual prosperity,” said Moon who repeatedly welcomed the conclusion of the Regional Comprehensive Economic Partnership (RCEP) during the two-day summit to commemorate the 30th anniversary of dialogue relations between the two sides.

Fifteen RCEP participating countries concluded text-based negotiations and all market access issues early this month in Bangkok, Thailand, with an aim to sign the mega free-trade pact next year.

Initiated in 2012, the RCEP brought together the 10 ASEAN member countries and their six trading partners in the region, including China, South Korea, Japan, India, Australia and New Zealand.

“We welcomed the conclusion of text-based negotiations for all 20 chapters of the RCEP by 15 participating countries earlier this month in Thailand with a view to signing the agreement in 2020,” the Thai prime minister told the joint press conference.

Asked about the repeated emphasis on the RCEP, Chung Hae-moon, former South Korean ambassador to Thailand and former chief of the state-run ASEAN-Korea Center, said in an interview with Xinhua in Busan that the regional trade deal would benefit both the ASEAN and South Korea, which depends on export for about half of its economy.

“We are in the middle of uncertainties in the global economic and trade environment. This RCEP will breed a new air into the world community that must be very anxious about the uncertainties,” said Chung.

“I believe RCEP will serve as an anchor for an open, inclusive, transparent, rules-based, multilateral trading system, from which (South) Korea, ASEAN and China have benefited tremendously over the last several decades,” said the former career diplomat.

In the joint vision statement released after the ASEAN-ROK summit, the two sides agreed to their “commitment to support for the enhancement of trade and investment and the resistance to all forms of protectionism in order to improve regional development and prosperity.”

South Korea’s free trade agreement (FTA) with the ASEAN came into force in 2012,  with the country already signing separate bilateral FTAs with some of the ASEAN member countries or pushing for negotiations for new bilateral free-trade deals.

Chung said the ASEAN and South Korea had clearly expressed their support for the “expansion of multilateralism and international trade” in several occasions as the multilateral trade system “has benefited so much to all of us.”

“Every country has a common interest in spreading the philosophy of multilateral trade… No country should be an exception,” Chung noted.

The South Korean president advocated a so-called New Southern Policy since his inauguration in May 2017 as part of efforts to raise the country’s strategic partnership with ASEAN to a higher level.

Moon said in a formal session of the group summit that his country and ASEAN can overcome such challenges as “trade protectionism, transnational crimes and the Fourth Industrial Revolution” through cooperation and solidarity.

The South Korean leader offered to his ASEAN counterparts building a fair, free “trade community” to prevent trade protectionism from shrinking trade and investment in the region.

“Every relation has both opportunities and challenges. The wisdom is how to cooperate overcoming the challenges,” said Chung.