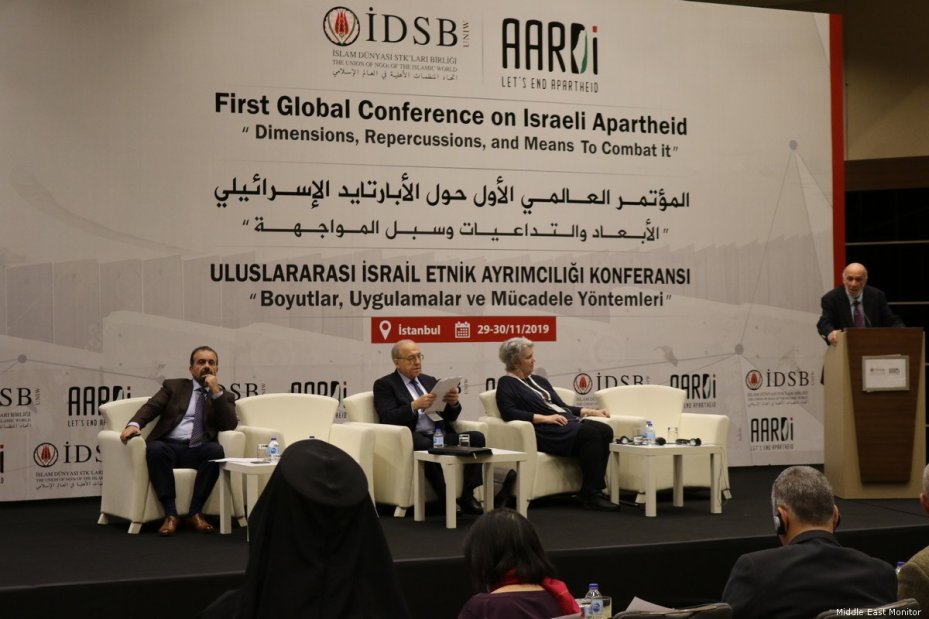 Israel’s continued occupation of Palestinian territory, as well as the efforts that Israel goes to to impose second-class citizen status on Palestinian citizens and inhabitants of the occupied West Bank prompted the “First Global Conference on Israeli Apartheid” to take place in Istanbul, Turkey, last weekend.

Inaugurating the conference, President of the Union of Non-Governmental Organisations in the Islamic World (UNIW), Ali Kurk reiterated the Western governments’ overwhelming support for Israel’s apartheid system and the country as a whole, and stated: “International law has become meaningless now the law of the strong rules.”

Retired general of the Turkish armed forces who was appointed Chief Political Adviser to Turkish President Recep Tayyip Erdogan in 2016, Adnan Tanriverdi, said Jerusalem was particularly under threat of becoming a purely Jewish city as a result of Israel’s policy of evacuating Palestinian homes in occupied East Jerusalem and then either allowing Jewish settlers to occupy them or destroying them.

Former Executive Secretary of the United Nations Economic and Social Commission for Western Asia (ESCWA), Rima Khalaf, said Israel is “the only country in the world to confer full citizenship based on inherited religion.” She also linked the Israeli apartheid system to the racial Darwinism that was prevalent throughout the 19th and 20th centuries in Europe, which fostered an ideology of racial and ethnic supremacy that is the root cause of apartheid.

Archbishop of the Greek Orthodox Church in Jerusalem, Atallah Hanna, added: “Israeli occupiers want Muslims and Christians to be racist to each other,” but that will not work as “we share a common Palestinian identity.”

He warned that Israel is carrying out a gradual ethnic cleansing campaign in Jerusalem in an effort to turn it into a purely Jewish city. The Christian population of the holy city has been decreasing over the years, he added, making up only one per cent of the population now. The solution, he said, is for both Christians and Muslims to join forces as they are both being insulted and oppressed by the Israeli occupation.

Former United Nations human rights investigator Richard Falk said Israel is continuing the legacy of European-style colonialism by shifting entire demographics on the ground. This Zionist project “was unfolding at a time when colonisation was collapsing,” and that colonial legacy did not simply end in 1967 but is continuing to this day with its allies such as the US providing “unconditional” support.

This policy of demographic change makes the two-state solution defunct and no longer a viable solution, Falk added. It is “a ghost-solution or a zombie-solution” which refuses to die, which Israel holds onto due to the fact that if it renounces that concept then it will effectively renounce the very legitimacy of a separate and autonomous Jewish state. This reality of Israel’s established population plan, international political manipulation, and US support makes for a “dystopian outcome which rests on violence and apartheid”.

The unreliability of the two-state solution has long been espoused by many among both the pro-Palestine and pro-Israel communities, with some calling for a one-state solution instead, in which Palestinians have an equal status as Israelis and apartheid is abolished, while others call for a more Jewish identity and supremacy in the state of Israel.

Palestinians need to have a clear vision of how to navigate through their predicament, former Arab member of the Israeli Knesset (parliament) Haneen Zoabi said. She stressed that Palestinians – whether in the West Bank or in Israel – will not be liberated and apartheid will not be destroyed by going to the courts and asking for help.

Israel’s monopoly in the court system and its apartheid policies will not enable such endeavours to succeed, she explained. But the failures of such attempts have woken Palestinians up and encouraged them to be more active.

The conference was hugely effective in shedding light on the extent of the Israeli apartheid system and its suppression of the Palestinian people, with a variety of well-experienced and knowledgeable speakers, intellectuals, academics and figures at the forefront of it. A plethora of statistics and research were efficient in propagating the continued plight of Palestinians living under occupation and the numerous unspeakable violations of human rights and international law that the state of Israel has committed.

What the conference failed to do, however, was provide clear and direct solutions to the issue of the Israeli apartheid as a whole. This is not entirely blameworthy on the conference itself – the crisis of the Israeli-Palestinian “conflict” is not an easy one to find solutions for – but apart from Tanriverdi’s call for a united military force in the Muslim world, recommendations on how to pressure Israel using international law, frequent references to toppling of apartheid in South Africa and the Boycott, Divestment and Sanctions (BDS) movement, a clear and united solution was sorely lacking.

The final communique on the conference, UNIW included the five primary guidelines which are to be observed in its aim to form the Global Coalition against Israeli Apartheid: