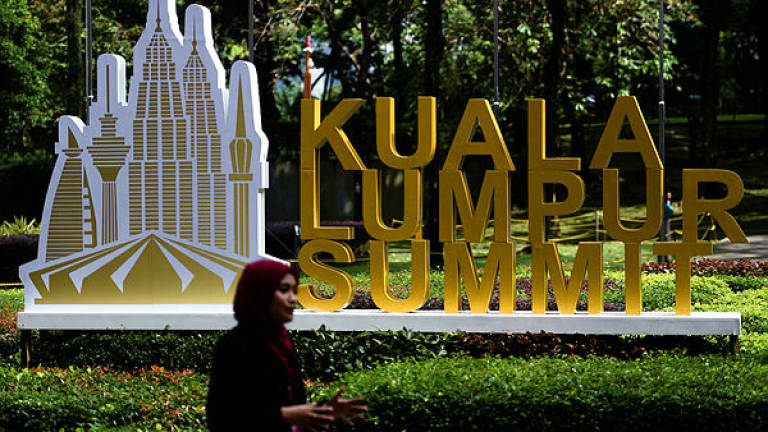 In his message to the participants on the event website, klsummit.my, Prime Minister Tun Dr Mahathir Mohamad highlights the challenges faced by Muslim nations.

Among them are abuse of power, corruption and being accused of becoming a breeding ground for terrorism.

Due to those reasons and others, Dr Mahathir said the most important task was to turn the decisions taken at the summit into reality.

“We proclaim that all Muslims are brothers and yet, our nations are involved in endless civil wars, sectarian wars, wars with our Muslim neighbours and inviting non-Muslim nations to assist us in our wars with fellow Muslims.

“For far too long we have been associated with bad governance, endemic corruption and a breeding place for terrorism,” wrote the prime minister, who is also the chairman of the summit.

The summit is scheduled to take place from Wednesday to Saturday.

“We can keep on shouting that such labels, especially being breeders of terrorism, as callous anti-Islam propaganda.

“We know that it is really true but our weakness and disunity have given credence to this propaganda.

“Such is the state of affairs among our nations that Muslims end up on the shores of nations governed by those from other faiths and our brethren’s fate rests solely on their mercy.

“It is against these backdrops that the KL Summit was hatched and it is earnest in wanting to contribute in the improvement of the state of affairs among Muslims and the Muslim nations.

“We have always reflected on how great, enriching and powerful the Islamic civilisation was. It is a chapter in history and we yearn for its return. It will remain a yearning unless we do something about it.

“The KL Summit, which gathers Muslim leaders, intellectuals and scholars, was conceived with the noble objectives of identifying the problems afflicting the Muslim world and finding solutions to them.

“But, no matter how many brilliant ideas the KL Summit hatches, without the support of leaders and governments of the Muslim nations, these ideas will remain ideas.

“It is my fervent hope that participants at this KL Summit will take this challenge of turning all our declarations and decisions into realities.”

Early indications are positive with more than 50 countries confirming their presence.

There will be 400 participants, half of them from abroad.

The event will give a chance not only to Muslim leaders but also intellectuals and scholars to discuss and exchange ideas. The aim is to produce new, creative and viable solutions to the problems facing Muslims.

The summit will focus on seven areas, or “pillars”, including development and sovereignty, integrity and good governance, culture and identity, justice and freedom, peace, security and defence, trade and investment and lastly, technology and Internet governance.