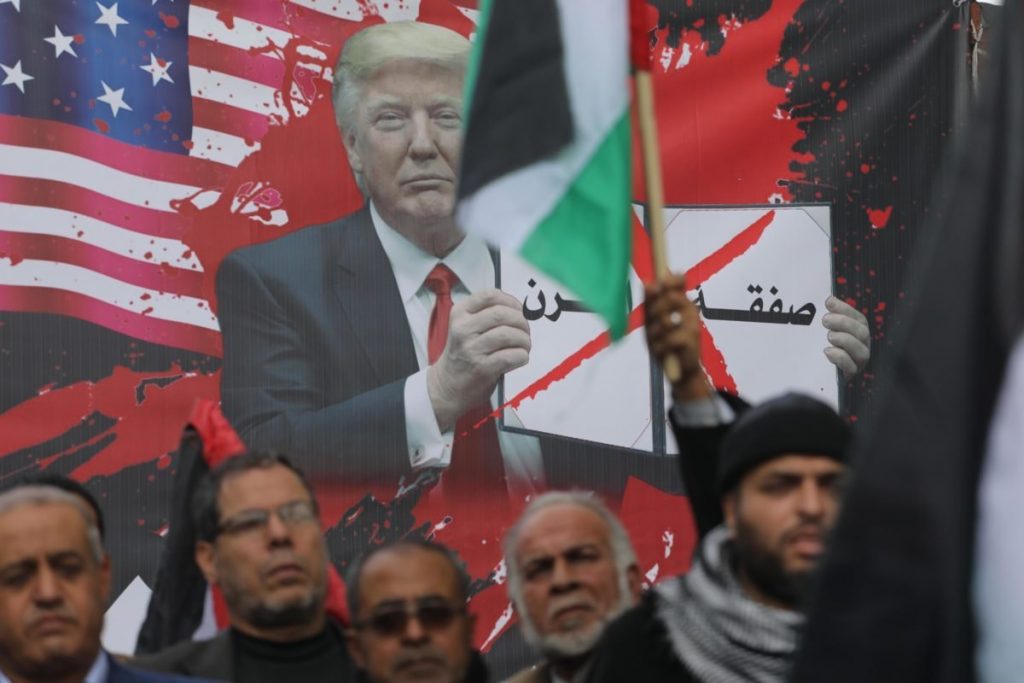 Trump’s initiative, whose principal author is his son-in-law Jared Kushner, follows a long line of efforts to resolve one of the world’s most intractable issues.

Trump said Jerusalem will remain Israel’s “undivided capital”. But he also said under the plan, “eastern Jerusalem” would serve as a capital of a State of Palestine. He did not elaborate on what he meant by eastern Jerusalem. He later said on Twitter the a Palestinian capital could be in parts of “East Jerusalem”.

Trump had already recognised Jerusalem as the capital of Israel, moving the US embassy from Tel Aviv to the city.

Sami Abu Zhuri, a Hamas official, said Trump’s statement was aggressive and the Palestinians will confront this deal. ‘Jerusalem will remain a Palestinian land.’

International reactions
Turkey’s president, Recep Tayyip Erdogan, emphasized that Jerusalem is sacred for Muslims and announced: Trump’s so-called peace plan proposing to leave Jerusalem to ‘Israel’ never acceptable.
Numan Kurtulmus, deputy chairman of Turkey’s ruling Justice and Development Party (AK), also slammed Trump’s statements on Jerusalem, saying: ‘No, Trump! Jerusalem is the capital of the Palestinian state and the heart of the Islamic world!’
The foreign minister of Iran, Javad Zarif, posted on Twitter: ‘the so-called “Vision for Peace” is simply the dream project of a bankruptcy-ridden real estate developer. But it is a nightmare for the region and the world. And, hopefully, a wake-up call for all the Muslims who have been barking up the wrong tree.’
In the far east,  the ministry of foreign affairs of Indonesia issued a statement suggesting that the issue of Palestine shall be resolved based on the principles of the “two-state solution” that respects international law and internationally agreed parameters.
Meanwhile, a spokesperson of China’s foreign ministry commented on the US proposal, saying: ‘We noted media reports on that and are studying this plan. We believe the Palestine issue should be resolved on the basis of relevant UN resolutions, the principles of “two-state solution” and “land for peace” and other international consensus, which should all be observed.’

At least 41 people were wounded after the Israeli forces used rubber bullets and tear gas in the Jordan Valley, the Al-Orub refugee camp and Tulkarem, according to the Red Cross.

Palestinian President Mahmoud Abbas vowed popular mobilisations against the deal, as groups including the Palestinian Liberation Organisation (PLO) and Hamas, which has governed the occupied Gaza Strip since 2007, called for mass protests.