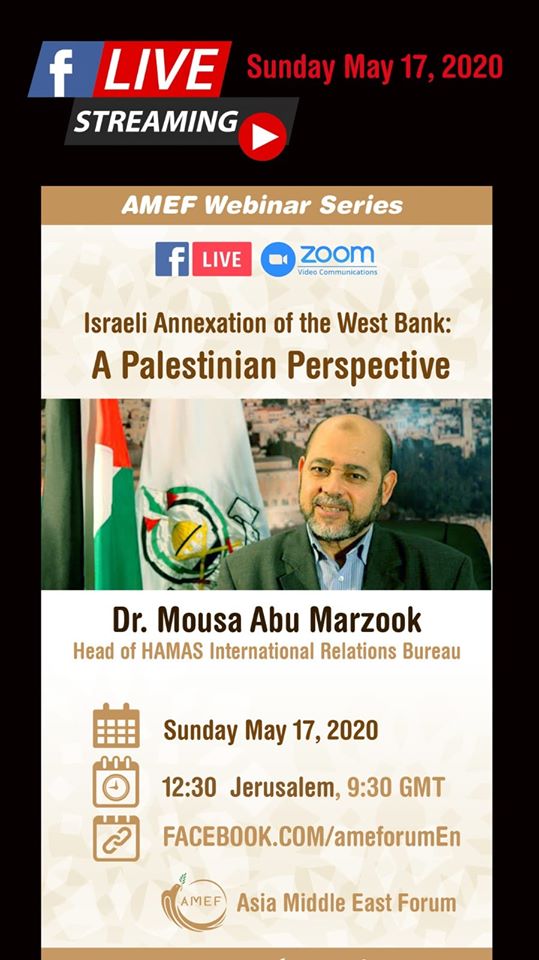 Dr. Abu Marzook began his talk with historical and factual backgrounds of the Israeli occupation, and particularly traced the Israeli settlement activities in the West Bank. The talk shows that for many years, numerous Israeli governments erected settlements over the Palestinian territory without disruption. As a matter of fact, the speaker says that Israelis have built about 200 settlements in the West Bank from 1967 to 2017.

The speaker emphasizes the Israeli annexation of the West Bank is a serious matter as the Palestinian territory has literally become an isolated island or a Bantustan. He explains that the West Bank has been divided into three areas with multiple security and administration authorities. The division can be seen in three parts: Area A (administered by the Palestinian Authority), Area B (under Palestinian civil administration and Israeli security control), and Area C (fully controlled by the Israeli occupation authorities). In addition, Dr. Abu Marzook sees a jeopardy in the association between the annexation plan and Trump-Netanyahu deal (Deal of the Century). The Palestinian leader explains that while the international community agrees on the two-state option in Palestine, the enforcement of the Israeli law in the West Bank means the end of such proposed solution. It eliminates the possibility of establishing a state that includes the West Bank as the area shrinks significantly and it would become smaller ghettos surrounded by the Israeli entity from all sides. Furthermore, the annexation plan has implications over the Palestinian freedom of movement and commercial and economic activities. It also gives the Israeli occupation more freedom to attack Palestinian rights, steal extra Palestinian lands and control water sources and strategic locations, such as halls and mountains.

The head of Hamas’ International Relations Bureau reviews a number of international actors’ positions on the Israeli settlement. First, the official American attitude towards settlement has transformed from labeling the activity as illegitimate, then illegal and later to merely describe it as an obstacle to peace. And finally, the speaker points to the current supportive position of the US administration which he views as completely contrary to the international law.
The European position on settlement seemingly moves to criminalize the Israeli activity. However, the speaker questions the EU effective role over this matter as it could translate its position into, for instance, exerting economic pressure on the Israeli occupation. And he further contemplates that a confusion of EU positions could have negative reflections in the future.

As for the Arab and Muslim worlds, the leader of Hamas acknowledges the firm support of public and highlights the wider rejection of the occupation existence and any normalization of relations with the occupiers among them. The Arab League, Organization of the Islamic Cooperation (OIC) and individual states declared their disagreements over the Israeli plan, and there remains a hope for more steps.

Dr. Abu Marzook states that Palestinians reject and confront the Zionist plan to implant settlements and settlers. To the speaker, the situation is not easy, considering the alliances and crisis that take place in the region and beyond which ,for him, leads to a lack of influence for the Palestinian political system. Also, the history informs that (Israel) did not adhere to any international resolution. This all guides to the reality that the Palestinian armed resistance constructs the greater impact in the context, as justified by the speaker.

– Withdrawing the recognition of (Israel)

A summary prepared by: Belal Samir.