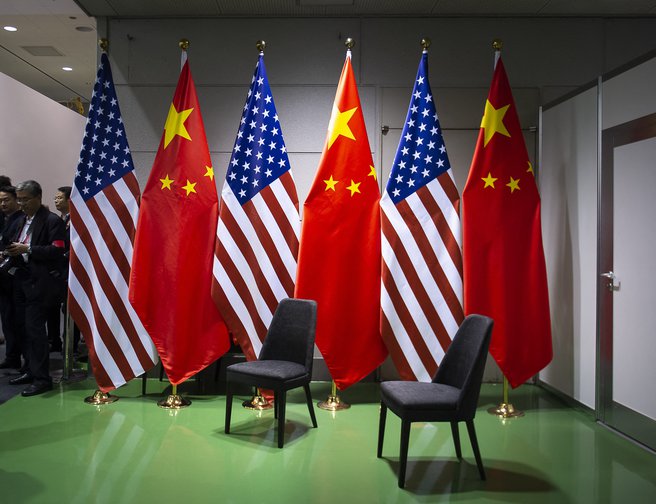 Mistrust and rivalry have been simmering between the US and China for years. Since the start of the COVID-19 pandemic, this has given way to open hostility. Could this lead to a new Cold War?

A “new Cold War”: the loaded term had already been floating in the air for some time, but on May 24 it was first used publicly by Chinese Foreign Minister Wang Yi at the recent National People’s Congress in Beijing. He was reacting to Washington’s accusations that China was responsible for the global spread of the coronavirus pandemic.

Wang accused Washington of spreading “lies and conspiracy theories,” telling journalists that in addition to the coronavirus, there was a “political virus” running rampant in the United States.

At a White House event in early May, President Donald Trump called the pandemic the “worst attack” the US had ever experienced, and put the blame squarely on China.

In the early days of the pandemic, optimists held out hope that the global crisis could lead to more cooperation between Beijing and Washington. But these recent broadsides are symptoms of a deeper conflict between the US and China.

Josef Braml, an expert for US affairs at the German Council on Foreign Relations, told DW the pandemic had accelerated and reinforced economic and geostrategic competition between the two world powers. He said both countries were vying to control trade streams, finance streams and data streams, with the latter being the most important.

Nowhere has this become more apparent than in the case of Chinese telecommunication giant Huawei, one of the world’s leading companies when it comes to 5G networks. “Huawei is the global spearhead of Chinese innovative power and technology policy,” said Sebastian Heilmann, a China expert at the University of Trier. “This means that Huawei has a great significance going beyond the company itself. It is absolutely no wonder that the US is using every means it can at the moment to end Huawei’s success story.”

At the Munich Security Conference in February, US Secretary of State Mike Pompeo described Huawei and other Chinese state-run technology companies as “Trojan horses for Chinese intelligence.” His statement reflects the suspicion harbored by some in the West that Huawei could build backdoors into its 5G networks, giving Chinese spies free access to data streams at the heart of the new digital economy.

In March, the US ambassador to Germany, Richard Grenell, upped the ante by writing a letter to German Economy Minister Peter Altmaier warning that the US would stop cooperating with German intelligence agencies if Huawei were involved in building 5G networks in Germany.

Washington fired its most recent salvo against Huawei on May 15, aiming at the company’s very heart: chip production. The US said American machines, tools or other products would no longer be allowed to be involved in Huawei chip production anywhere in the world, a move Huawei said would endanger its very existence.

Less than a week later, on May 21, Chinese President Xi Jinping announced plans to invest $1.4 trillion (€1.3 trillion) in building 5G networks and developing artificial intelligence over the next six years, helping to ensure China’s technological independence.

Over the past 30 years, China has seen an unprecedented economic and technological rise, and jumped from being an impoverished developing country to a global economic power. In the fifth century BC, Greek historian Thucydides described the perilous dynamics between emerging and established powers, writing that the growing influence of the rising power inevitably leads to shifts in the geopolitical balance. He said these shifts must be cushioned by clever political decisions — or they will end in war.

US political scientist Graham Allison has cast a sobering look at the history of the past 500 years. Allison, a professor at Harvard University, examined 16 cases in which a new power came into being. His conclusion: In 12 of them, the “Thucydides trap” went into action, resulting in blood being shed.

“The rise of a 5,000-year-old civilization with 1.3 billion people is not a problem to be fixed. It is a condition — a chronic condition that will have to be managed over a generation,” Allison warned in a September 2015 article in The Atlantic, commenting on the US-China relationship.

Yet the current leaders in Washington and Beijing hardly seem willing to undertake this cautious approach. Until Xi Jinping became Communist Party leader in 2012, China’s politicians had followed a policy set out by former leader Deng Xiaoping, who was behind China’s policy of reform and gradual opening in the late 20th century: “Hide your strength and bide your time.”

Xi seems to feel that China’s time has now come. When he took office, he promised the Chinese people a return to the greatness of past dynasties, clothed in the image of the “Chinese dream” of the revitalization of the nation. China has been displaying this growing self-assertiveness on the international stage, on both the political and the military front. In the South China Sea, for example, American and Chinese warships have had several dangerously close calls in recent years. According to Heilmann, “with Xi Jinping, China’s irreconcilable political and ideological differences have come to the fore.”

Even before the pandemic, Trump was already blaming China for more or less everything that has gone wrong in the US. Ahead of November’s presidential election, he appears to be doubling down on this strategy — in part to distract from his own horrendous management of the coronavirus pandemic.

Heilmann is worried by the fact that both Trump and Xi are playing the nationalist card. “Xi Jinping feels himself to be at the height of his powers and is basking in China’s success at controlling the pandemic. Donald Trump is under a lot of pressure. And neither of them is willing to compromise,” he said.

A report published by the Trump administration on May 20 gives an insight into Washington’s worldview. In the 16-page document, entitled “United States Strategic Approach to the People’s Republic of China,” the authors explicitly turn away from the assumption that integrating rivals into international institutions and global trade structures will turn them into benign players and trustworthy partners.

Trump has already gone a step further toward escalating tensions: In an interview with US broadcaster Fox News in mid-May, he mused on whether the US could cut off relations with China entirely, even predicting that the US would save $500 billion by doing so.

“The familiar way of thinking that free trade helps everyone, the win-win concept, has now been turned on its head,” said US expert Braml. “Now, the idea is: Mutual dependence makes you vulnerable. We are living in a zero-sum world.”

It remains unclear how Europe will find its place in this new world, as Gerard Araud, the former French ambassador to the US and the UN, noted on Twitter in May. The growing polarization between China and US may mean that the time when profitable deals could be made with both sides is coming to an end.

At any rate, post-Brexit Britain has already made its own decision regarding Huawei. In late May, Prime Minister Boris Johnson called on his officials to cut ties with the Chinese company’s involvement in the UK’s 5G networks by 2023. Washington, no doubt, was delighted by the move.