Webinar Summary: Towards a New Vision for the Struggle for Palestine 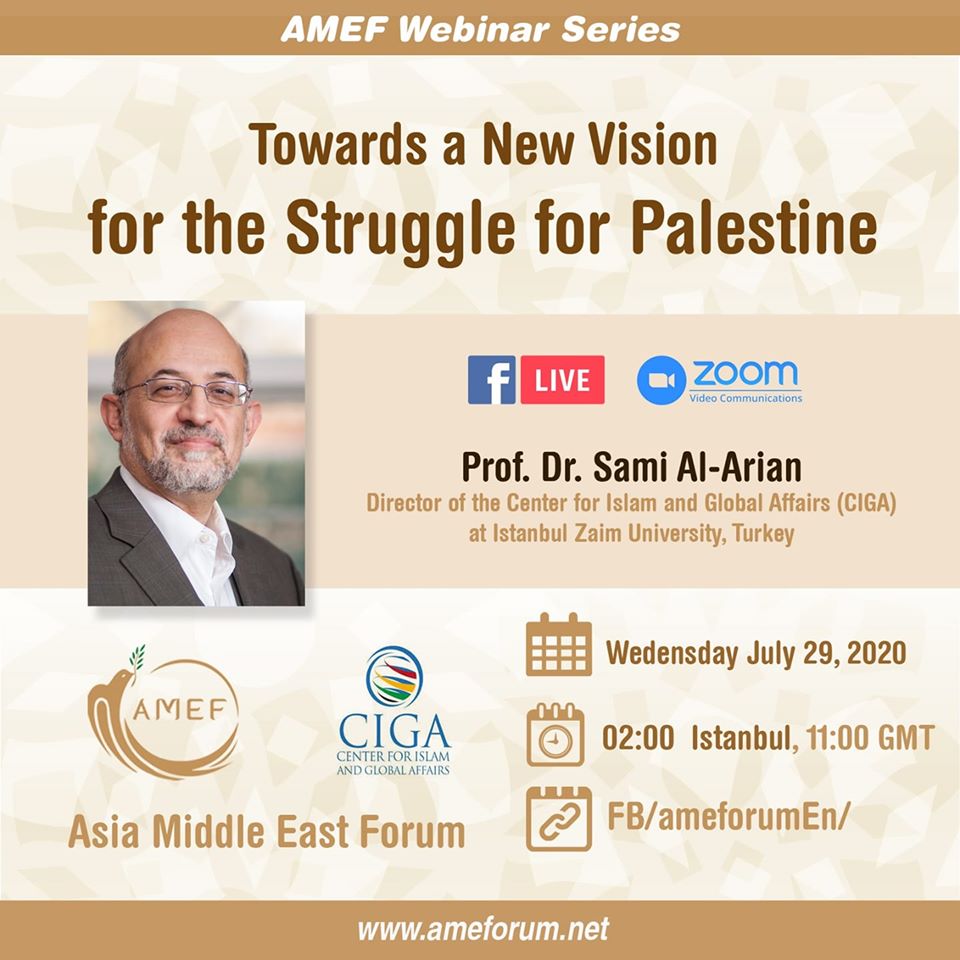 The Asia Middle East Forum has organized its forth live webinar entitled ‘Towards a New Vision for the Struggle for Palestine’. The talk was delivered by Prof. Dr. Sami Al-Arian, Director of the Center for Islam and Global Affairs CIGA at Istanbul Zaim University.

Prof. Dr. Sami Al-Arian outlines his talk by two main points: background of the Palestinian cause and Jewish history, and fresh vision for the struggle for Palestine.

The speaker began his talk by highlighting substantial differences in dealing with Jewish communities under Muslim rule and Christian authorities throughout the history. Under the constitution of Madinah, the Jewish community or Jews of Islam who were part of the Arabia lived in security and peace together with Muslims and people of other faiths. On the other hand, Jewish communities in Europe lived in ghettos for centuries, facing multiple forms of discrimination, marginalization and restrictions. Despite some improvements upon the emancipation of Jews in the age of Enlightenment, the debate over the so-called Jewish problem in Europe had continued to take place in the 19th and 20th centuries.

Prof. Al-Arian explained that the imperial and colonial movements in Europe had given momentum to the Zionist movement as they identified a common ground in establishing a colonial entity in the heart of the Arab world and while Europe would get rid of the “Jewish problem”. The former European move came also in line with own objective to dismantle the Ottoman Empire, and fragment the Middle East into separate countries. The British role was much obvious as it pledged to support the erection of a Jewish national home in Palestine in the form of the Balfour Declaration. As the Ottoman Empire was in decline, the British forces had controlled Palestine (British Mandate) and subsequently gave way to Jewish immigrants to arrive and settle in the land, and allowed them to establish settlements or Kibbutz and carry arms. It is worth mentioning that towards the end of 19th century and before the Mandate came into force, the Jews in Palestine had constituted only some 2.5% of the total population. Later, the Zionist conquest in 1948 resulted in the occupation of 79% of Palestine and it led to the expulsion of 60% of the indigenous population from their homes. In 1967, “Israel” had further expanded its occupation and seized the West Bank, Gaza Strip, Sinai Peninsula, and Golan Heights.

The Director of the Centre for Islam and Global Affairs emphasizes that Western powers supported the Israeli occupation in all sorts of ways as Britain, Germany, France and the United States enormously gave life to it through military, political, diplomatic and security assistances, among others.

The lecturer also elaborates on the persistence of the Palestinian issue which has lasted for many decades and is still alive. He particularly acknowledged the role of Palestinian national movements and mass uprisings in this field where people resisted the occupation and remained steadfast on their land. In contrast, Prof. Al-Arian explained the inclination of the Palestinian Liberation Organization (PLO) under a regional pressure to opt for “peace process” with the Israeli authorities which resulted in the recognition of the PLO as the official negotiator on behalf of the Palestinian people in exchange with PLO’s abandonment of 78% of the Palestinian land. The speaker also examined the viability of “the two-state solution” and realized that it has become impossible after the Deal of Century which declared Jerusalem as the eternal capital of “Israel” and legitimized the annexation of large parts of the West Bank, including the Jordan Valley. The one-state solution, if any, is considered unjust to more than 7 million Palestinian refugees who have the right to return to their land.

Prof. Al-Arian believes that the only solution to Israeli occupation is to dismantle the whole Zionist project with all of its institutions and instruments. Hence, he proposes a number of principles that Palestinians and free people elsewhere may need to adhere to in order to achieve justice in the region. These principles include: the restoration of the Palestinian rights; the need of other actors to join forces with the Palestinian people; “Israel” attempts to become the hegemon in the area, threatening the whole region; the struggle is against oppression and global threat that may concern the whole humanity; the need to understand the Israeli strategic imperatives in order to deal with it effectively; much larger role for common people, not only elite; alliance with other movements related to just struggles; the project must have strategic and operational plans; and finally the Zionist project will collapse upon changes in the balance of power.

The Zionist project was erected and is still operating based on supportive pillars, Dr. Al-Arian outlines 12 strategic imperatives that sustain the Zionist entity and could be utilized to weaken the project, as follows:

All in all, the region will remain threatened as long as the Zionist project is not dismantled. The Middle East could become more fragmented, weakened and in extreme turmoil unless the Israeli occupation is ended. The one-state solution or two-state solution have evidently become irrelevant in this context, and those concerned need to study the Israeli strategic imperatives and sources of strength in order put an end to the occupation. The struggle requires collective efforts from Palestinians and other concerned movements and peoples around the world. The Palestinian struggle is indeed for all humanity.