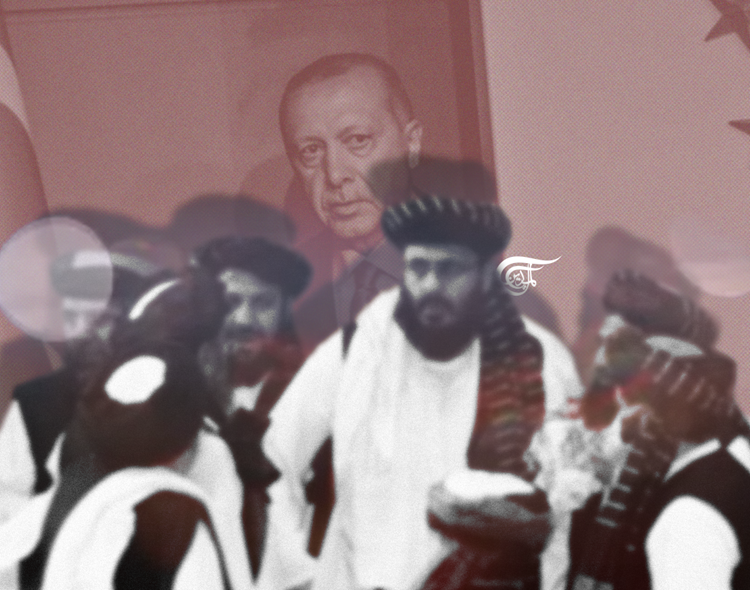 Turkey has historical, cultural and ethnic ties to Afghanistan. The first “alliance agreement” between the two countries dates back to 1921. Turkey in 1930 supported its modernization and stood against the Soviet invasion in 1979. During the civil war in 1990, it supported the Uzbek “Gunbesh Party” and its leader, Abdul Rashid Dostum, who fled to Turkey. Ankara after the Taliban took power in 1996.

Ankara’s involvement in Afghanistan increased dramatically after the US invasion in 2001, which led to the collapse of the Taliban regime, as Turkey deployed its forces in Afghanistan as a member state of NATO in 2002. With the Justice and Development Party taking power, It strengthened its military presence there. Since then, it has enjoyed a strong military presence there. It is the only country in the “NATO”, with a Muslim majority, that has an army in Afghanistan.

As part of NATO, Ankara did not reduce the number of its forces in the country in 2014, but rather took a more prominent role in the Resolute Support training mission. In 2015, President Erdogan said that Turkey could have a long-term military presence in this country, which neighbors China, Iran, Pakistan and a number of Central Asian countries.

Ankara has defined its foreign policy towards Afghanistan, focusing on four goals:

Turkey has made a significant financial contribution to Afghanistan, both bilaterally, and through the United Nations and NATO. Since 2001, Turkey has invested an estimated $1.1 billion in security, health, education, and infrastructure, as of May 2019, and even said it could maintain or increase this support.

Ankara’s priority in Afghanistan goes beyond its stability, and it aims to cooperate with the Turkic-speaking countries of Central Asia, and to establish relations in those countries through the fight against terrorism. One of her ambitions was also to play the role of mediator in the peace process between the Afghan government and the Taliban. The US envoy, Ambassador Zalmay Khalilzad, visited Ankara more than once last year, to coordinate between Pakistan, Qatar and Turkey, which established relations with political groups over the years, especially with Rashid Dostum, who enjoys Turkish support, and he joined two warlords The former Afghans – Atta Muhammad Noor, the powerful governor of the northern province of Balkh, and Muhammed Muhaqiq, the Afghan Executive Vice President Abdullah Abdullah – formed an alliance against Afghan President Ashraf Ghani. Despite the relationship that Turkey has forged with the Afghan president, it has strengthened its contacts with the leadership of the “Taliban” in recent years.

President Erdogan has made no secret of his ambitions to increase his country’s influence among the Muslim nations of Iran, Saudi Arabia and Pakistan. Turkey has hosted a series of conferences on the Afghan crisis in the past few years, and has urged both Afghanistan and Pakistan to resolve their differences and work for regional peace and stability. She called on the “Taliban” to enter into peace talks with the government in Kabul, but it did not succeed in bringing Islamabad and Kabul closer, nor persuading the “Taliban” to conduct negotiations with the Afghan government.

Turkey’s policy toward Afghanistan is more ambitious than it appears. Erdogan believed that a Turkish-brokered peace agreement in Afghanistan would raise his profile in NATO, as well as in the Muslim world. He wanted NATO members to admit that they could not achieve any success in Afghanistan without Ankara’s help, as Turkey could gain political influence, which it exercises over its European allies, by using its influence in Afghanistan to achieve NATO’s objectives in the war. It was expected that it would play an active role in the Afghan peace process, and open a new page in the relationship between it and Washington, and considered that peace and stability in Afghanistan depended on the successful management of local and international balances of power.

The rapid fall of Kabul to the “Taliban” surprises Turkey

Turkey tried to benefit from its relationship with Pakistan and the Pakistani intelligence, as well as from its relationship with Afghan actors, but it was surprised by the “Taliban” control of Kabul, and the departure of the United States earlier than expected from Afghanistan. Ankara was preparing for the required mediation role between the “Taliban” and the West, and assumed the task of managing the Kabul airport, as soon as the “NATO” forces completed their withdrawal. Her soldiers remained there. The Turkish president was not convinced by the Taliban’s refusal to take over the security of Kabul airport, and said that he would personally go to meet their leaders. Ankara sought to mediate with Qatar in order to strengthen the diplomatic contacts it established with the political wing of the “Taliban”, through Pakistan, where Defense Minister Hulusi Akar visited it with a high-ranking delegation, in addition to senior intelligence men.

Pakistan is one of the main countries in the Afghanistan issue, due to its 2,400 km border with it. And it has influence in it, especially the units of the Pakistani military and intelligence offices, which have a great influence on the “Taliban”. Many experts believe that a lasting solution to the Afghan issue cannot be reached without Pakistan’s consent. This situation increases the importance of the close relationship between Turkey and Pakistan. In this regard, the strategic relations between Ankara and Islamabad can make a difference in establishing peace and stability in Afghanistan.

Turkey believed that it was the most receptive country to sending troops to Afghanistan as an observer, and was betting that the Taliban and other opposition groups, which vehemently reject the presence of US or other countries’ forces in Afghanistan, might accept the presence of a Turkish-led peacekeeping force. Taliban spokesman Suhail Shaheen responded to Erdogan’s insistence on playing a role in Afghanistan, saying, “Turkey is a very important player for the Taliban, and it is a respected and powerful country in the world, and it has a special place for the Muslim community. Turkey’s relationship with Afghanistan cannot be compared with any another country.” However, he seems to have defined its role in reconstruction, adding that the infrastructure has completely collapsed due to the occupation and the administration of the Afghan government, and that the “Taliban” “want to cooperate with Turkey in the areas of health, education, economy, construction and energy, as well as the treatment of underground resources.” He added, “Our biggest expectation from our Turkish brothers is that they play an active role in the areas that we have listed after adjusting our internal balance completely.”

Erdogan’s strategy focuses on gaining influence in the next government through Afghan figures close to it, including Gulbuddin Hekmatyar and Salahuddin Rabbani, the leader of the Jamaat-e-Islami party, who played a role in the Istanbul Peace Conference, which the Taliban refused to attend. And the two worked to convince the “Taliban” that there would be reconciliation in the country, by adopting a transitional government.

Given its historical and ethnic relationship with the Uzbeks and Tajiks on the one hand, and with Afghanistan as a government on the other, Ankara believes that there is a glimmer of hope in restoring the relationship with the United States, through its role as a mediator and providing services to Washington, which wants normal relations with Kabul. Thus, it can trade it for the sanctions policies that threaten it, or it can resort to requesting economic aid from Europe, especially since the issue of Afghan refugees will pose a problem for the Europeans.

The success of foreign relations is important for Erdogan also inside, as well as the nationalist discourse that can be strengthened in light of relations with Central Asian countries through Afghanistan. Economically, things seem easy for Turkish companies, after the government suffered recently due to its failures in the issues of floods and fires, and it wants to benefit from Afghanistan. It is an opportunity for it, and it will have a share in addition to the shares of the countries surrounding Afghanistan, but all the gains it wants seem to depend on the formation of its government’s “demands” and determining its policy.