Hudson Institute and debate on COVID-19 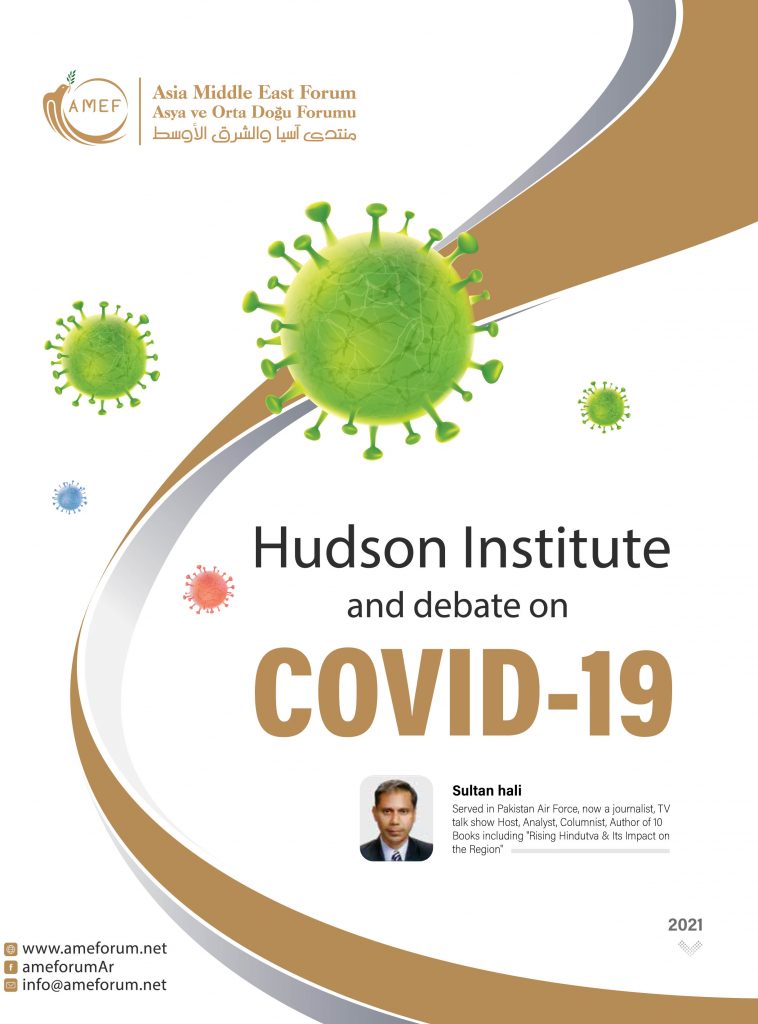 Hudson Institute, which has been providing food for thought for over six decades to US public policy makers and global leaders in government and business through a vigorous program of publications, conferences, policy briefings, and recommendations, sometimes adopts a biased approach.

According to its website, it was founded in 1961 by strategist Herman Kahn. The protagonists of Hudson Institute claim that this premier institution challenges conventional thinking and helps manage strategic transitions to the future through interdisciplinary studies in defense, international relations, economics, health care, technology, culture, and law.

Its mission statement is promoting American leadership and global engagement for a secure, free, and prosperous future, which is a noble undertaking and it has been bringing issues to the fore, which necessitate debate and deliberation for which it deserves praise. Yet perhaps in its exuberance to project issues, it sometimes fails to present the obverse side of the matter much to the chagrin of neutral analysts, who seek to separate truth from chaff.

Take the instance of the global pandemic, COVID-19, which has shaken the entire world, Hudson Institute is still debating whether it is a natural break or it was created in a laboratory. The stance adopted by Hudson Institute is that COVID-19 is not natural but a strategically created tool or misfortune of a scientific lab test.

In light of the Occident’s incessant attacks on China and the rivalry between the US and the Chinese as well as their unending trade wars, it appears that the view presented by Hudson Institute is in consonance with the one being proliferated by US opinion builders in bashing China. This situation leads an unbiased observer to question whether this narrative influx is to enforce hidden agenda of hitting the Chinese gigantic economy and mislead the world.

COVID-19 has now been around for 20 months and has taken a toll of millions of precious lives, rendered an equal amount jobless and shattered economies, the world over. The pandemic has targeted humanity, irrespective of caste, colour, creed or religion. UNCTAD in its recent update highlighted that only tourism industry would face loss of over 4 Trillion Dollars.

Despite the fact that it is a global phenomenon where each and every nation is grappling to deal with the consequences, yet some informed academics attached with Hudson Institute and other American think tanks are trying to manipulate this human suffering for their covert actions. To name a few, a so called authority on the subject associated with Hudson like David Asher and of his other compatriots are not only using the platform of this august institution to inducing media outlets to echo their specific viewpoint, which is one-sided. The redeeming factor is that credible media houses refuse to buy their version.

Regrettably, such false debates are a social crime and contrary to the mores, norms and values of humankind. The fictitious evidence being propagating by these intellectuals are creating impediments in global efforts to fight COVID-19, which is morphing into even more deadly variants.

While talking to ABC News, David Asher, Hudson Institute expert and a former US official who led the state department’s probe into coronavirus’ origins, opined that China’s refusal to allow access to American investigators suggests it had something to hide. The truth is that now more and more experts are ruling out manmade origin of COVID-19—Robert Garry, a microbiologist with Tulane University who has analyzed the genome of the virus—has been cited by National Public Radio (NPR), stating that “I am more convinced than ever that this is a natural virus.” Another renowned researcher Ian Lipkin from Mailman School of Public Health at Colombia University, deliberated on the genetics of the virus and dismissed human manipulation of the virus, saying “there is no evidence” to support the twisted version claiming otherwise.

David Asher quoted a story of-The DisInformation Chronicle titled: ‘Why Does the Wuhan Institute of Virology’s Shi Zhengli Keep Changing Her COVID-19 Story?’ on his microblogging site Twitter and tried to convince that China is misleading the world. Whereas Chinese government and officials are continuously updating COVID related information. It is the Chinese research, practices and measures which help the world to draft strategies to fight against COVID-19. During another talk with NBC News, David Asher launched another conspiracy theory by claiming, ‘Leading Wuhan Researcher Has Ties to China’s Military’. The reality is totally to the contrary, since from 2015 People’s Liberation Army ramped up recruitments of scientist and investment in the field of health research as part of its strategy to modernize its military. The coronavirus is showcasing the PLA’s growing expertise in medical research, including a major role in developing the coronavirus vaccine that was the first in the world to be approved for restricted use. Although the fabricated info war is there to link coronavirus as manmade lab based element but Chinese efforts are helping the world through providing technical support to fight against COVID-19 while on other hand supporting economies and humanity to revamp.

Michael Pillsbury, Director of the Center on Chinese Strategy, Hudson Institute, Washington, D.C., speaking to Indian daily Times Now‘s Editor-in-Chief Rahul Shivshankar spoke about China-US relations and Coronavirus impact on the USA in May 2020. Michael Pillsbury, who was recognized by former US President Donald Trump as an expert on China, stated that President Trump never accused China of releasing the Coronavirus, he started an investigation to see what exactly happened. He claimed that the Chinese have not been shy of accusing the U.S. of releasing this virus but the U.S. did not want to stoop to the level of defamation. In the same vein, he even warned the Chinese that if the trade deal is not implemented by China then this will have serious consequences.

Speaking to the gallery in India and the U.S. both of whom perceive China with antagonism, Michael Pillsbury declared that the international mood towards China, in the backdrop of the COVID-19 pandemic, was of anger, apprehension, frustration and betrayal. He opined that in polls taken to judge the sentiments of average Americans towards China, nine out of ten expressed outrage towards China. This result is to be expected because of strong negative propaganda to denigrate China by organizations like Hudson Institute.

Pillsbury’s statement of Trump not accusing China of being responsible for releasing the virus is incorrect. Even in his farewell speech to the people of USA, Trump called it the China virus and Wuhan virus.

Shockingly, Pillsbury, remaining oblivious of the Trump administration’s poor handling of the globally pandemic and endangering lives, suggested that the survivors of the Coronavirus victims in USA should sue the Communist Party of China to get waiver from the Sovereign Immunity Act to receive financial compensation.

The Wall Street Journal, in its Op-Ed titled ‘Intelligence on Sick Staff at Wuhan Lab Fuels Debate On Covid-19 Origin’, published on 24 May, 2021, claims that three researchers from China’s Wuhan Institute of Virology became sick enough in November 2019 that they sought hospital care, according to a previously undisclosed U.S. intelligence report that could add weight to growing calls for a fuller probe of whether the Covid-19 virus may have escaped from the laboratory.

China has repeatedly denied that the virus escaped from one of its labs. China’s foreign ministry cited a WHO-led team’s conclusion, after a visit to the Wuhan Institute of Virology, or WIV, in February 2021, that a lab leak was extremely unlikely. “The U.S. continues to hype the lab leak theory,” the foreign ministry said in response to a request for comment by The Wall Street Journal.

According to the article, the Biden administration declined to comment on the intelligence but said that all technically credible theories on the origin of the pandemic should be investigated by the World Health Organization and international experts.

Beijing has also asserted that the virus could have originated outside China, including at a lab at the Fort Detrick military base in Maryland, and called for the WHO to investigate early COVID outbreaks in other countries.

Most scientists say they have seen nothing to corroborate the idea that the virus came from a U.S. military lab, and the White House has said there are no credible reasons to investigate it.

China’s National Health Commission and Shi Zhengli, the top bat coronavirus expert at WIV, has said the virus didn’t leak from her laboratories. She told the WHO-led team that traveled to Wuhan earlier this year to investigate the origins of the virus that all staff had tested negative for Covid-19 antibodies and there had been no turnover of staff on the coronavirus team.

Marion Koopmans, a Dutch virologist on that team told NBC News in March that some WIV staff did fall sick in the autumn of 2019, but she attributed that to regular, seasonal sickness.

It is no coincidence that David Asher, the former U.S. official who led a State Department task force on the origins of the virus for then-Secretary of State Mike Pompeo, told a Hudson Institute seminar in March that he doubted that the lab researchers became sick because of the ordinary flu.

The WHO-led team that visited Wuhan concluded in a joint report with Chinese experts in March that the virus most likely spread from bats to humans via another animal, and that a laboratory leak was “extremely unlikely.”

However, team members said they didn’t view raw data or original lab, safety and other records. On the same day the report came out, WHO chief Tedros Adhanom Ghebreyesus said the team hadn’t adequately examined the lab leak hypothesis, and called for a fuller probe of the idea.

The fact remains that the US has been less than forthcoming than China in investigating the origin of COVID-19 which has been hypothesized by the some think tanks in the USA,

Hudson Institute needs to relook at its priorities and support truth.