Venezuela affirms its solidarity with Palestine 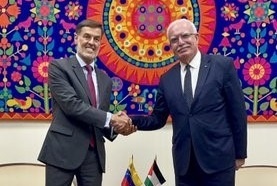 This approach came as a prelude to the 76th session of the United Nations General Assembly, where the Venezuelan Foreign Minister held important meetings with various representatives of the world.

During the meeting, the Venezuelan Foreign Minister affirmed “Venezuela’s solidarity commitment and President Nicolas Maduro to the just cause of the Palestinian people” and their firm commitment to sovereignty and self-determination.