What’s behind the China-Taiwan divide? 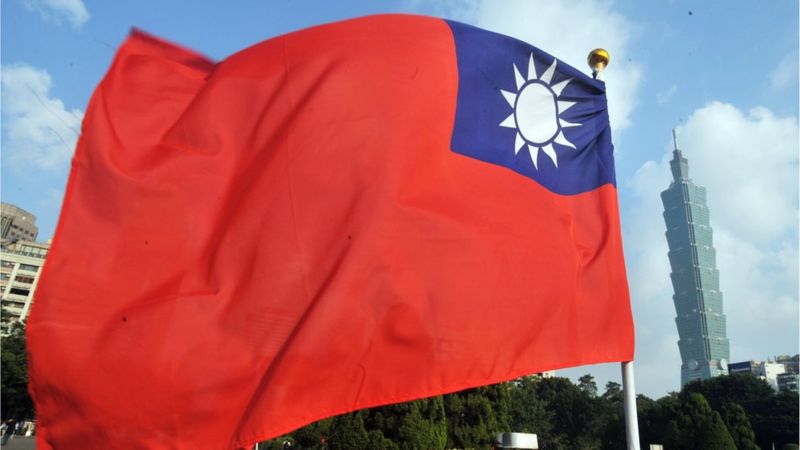 Whether it’s a bluff or a genuine threat of invasion, the increase in Chinese military activity in Taiwan over the last few months has caused global concern.

At the heart of the divide is that the Chinese government sees Taiwan as a breakaway province that will, eventually, be part of the country again.

Many Taiwanese people disagree. They feel they in effect have a separate nation – whether or not independence is ever officially declared.

What is the history of this tension?

Going back to the beginning – the first known settlers in Taiwan were Austronesian tribal people, who are thought to have come from modern day southern China.

The island seems to have first appeared in Chinese records in AD239, when an emperor sent an expeditionary force to explore the area – something Beijing uses to back its territorial claim.

From the 17th Century, significant numbers of migrants started arriving from China, often fleeing turmoil or hardship. Most were Hoklo Chinese from Fujian (Fukien) province or Hakka Chinese, largely from Guangdong. The descendants of these two migrations are now by far the largest demographic groups on the island.

In 1895, Japan won the First Sino-Japanese War, and the Qing government had to cede Taiwan to Japan. After World War Two, Japan surrendered and relinquished control of territory it had taken from China. The Republic of China – one of the victors in the war – began ruling Taiwan with the consent of its allies, the US and UK.

But in the next few years a civil war broke out in China, and the then-leader Chiang Kai-shek’s troops were beaten back by Mao Zedong’s Communist armies.

Chiang and the remnants of his Kuomintang (KMT) government fled to Taiwan in 1949. This group, referred to as Mainland Chinese and then making up 1.5m people, dominated Taiwan’s politics for many years – even though they only account for 14% of the population.

Having inherited an effective dictatorship, facing resistance from local people resentful of authoritarian rule and under pressure from a growing democracy movement, Chiang’s son, Chiang Ching-kuo, began allowing a process of democratisation.

President Lee Teng-hui, known as Taiwan’s “father of democracy”, led constitutional changes towards a more democratic political layout, which eventually led to the election of the island’s first non-KMT president, Chen Shui-bian, in 2000.

What about recent hostility?

Relations between China and Taiwan started improving in the 1980s. China put forward a formula, known as “one country, two systems”, under which Taiwan would be given significant autonomy if it accepted Chinese reunification.

This system was established in Hong Kong to be used as something of a showcase to entice Taiwanese people back to the mainland.

Taiwan rejected the offer, but it did relax rules on visits to and investment in China. In 1991, it also proclaimed the war with the People’s Republic of China on the mainland to be over.

And in 2000, when Taiwan elected Chen Shui-bian as president, Beijing was alarmed. Mr Chen had openly backed “independence”.

A year after Mr Chen was re-elected in 2004, China passed a so-called anti-secession law, stating China’s right to use “non-peaceful means” against Taiwan if it tried to “secede” from China.

Mr Chen was succeeded by Ma Ying-jeou, who, after taking office in 2008, sought to improve relations with China through economic agreements.

After Donald Trump won the 2016 US election, Ms Tsai spoke to him on the phone – a break with US policy set in 1979, when formal relations were cut.

Despite the lack of formal ties, the US has pledged to supply Taiwan with defensive weapons and has stressed any attack by China would cause “grave concern”.

Throughout 2018, China stepped up pressure on international companies, forcing them to list Taiwan as a part of China on their websites and threatening to block them for doing business in China if they failed to comply.

Ms Tsai won a second term in 2020. By that time Hong Kong had seen months of unrest, with protesters demonstrating against the mainland’s increasing influence – a development many in Taiwan were watching closely.

Later that year, China’s implementation of a national security law in Hong Kong was widely seen as yet another sign that Beijing was becoming more assertive in the region.

At the same time, the US has been intensifying its outreach to Taiwan and reassuring Taipei of its continued support. Last September, Washington sent the highest-level state department official in decades to visit the island.

Beijing strongly criticised the meeting, warning the US “not to send any wrong signals to ‘Taiwan independence’ elements to avoid severe damage to China-US relations”. During the controversial visit, China conducted a live-fire military exercise in the waterway that separates the island from the mainland.

This year, President Joe Biden’s administration has said its commitment to Taiwan is “rock solid”.

In the first few days of Mr Biden’s presidency, Taiwan reported a “large incursion” by Chinese warplanes over two days. Then on 12 April, the Taiwanese government said China flew the largest number of military jets into its air defence zone for a year.

In response, US Admiral John Aquilino, head of the Pentagon’s Indo-Pacific command, warned that a Chinese invasion of Taiwan “is much closer to us than most think”.

So who recognises Taiwan?

There is disagreement and confusion about what Taiwan is.

China regards Taiwan as a breakaway province which it has vowed to retake, by force if necessary. But Taiwan’s leaders say it is clearly much more than a province, arguing that it is a sovereign state.

It has its own constitution, democratically-elected leaders, and about 300,000 active troops in its armed forces.

Chiang Kai-shek’s Republic of China (ROC) government, which fled the mainland to Taiwan in 1949, at first claimed to represent the whole of China, which it intended to re-occupy. It held China’s seat on the United Nations Security Council and was recognised by many Western nations as the only Chinese government.

Given the huge divide between these two positions, most other countries seem happy to accept the current ambiguity, whereby Taiwan has virtually all of the characteristics of an independent state, even if its legal status remains unclear.

How much of an issue is independence in Taiwan?

While political progress has been slow, links between the two peoples and economies have grown sharply. Taiwanese companies have invested about $60bn (£40bn) in China, and up to one million Taiwanese people now live there, many running Taiwanese factories.

Some Taiwanese people worry their economy is now dependent on China. Others believe that closer business ties make Chinese military action less likely, because of the cost to China’s own economy.

A controversial trade agreement sparked the “Sunflower Movement” in 2014, where students and activists occupied Taiwan’s parliament protesting against what they called China’s growing influence over Taiwan.

A March 2021 opinion poll commissioned by the Taiwanese government shows that currently the majority of Taiwanese support the DPP government’s approach in “safeguarding national sovereignty”. More and more people also say they feel Taiwanese, rather than Chinese.

In the 2020 election Ms Tsai won a record-breaking 8.2 million votes, that was widely seen as a snub to Beijing.