Will a war break out between America and China on Taiwan? 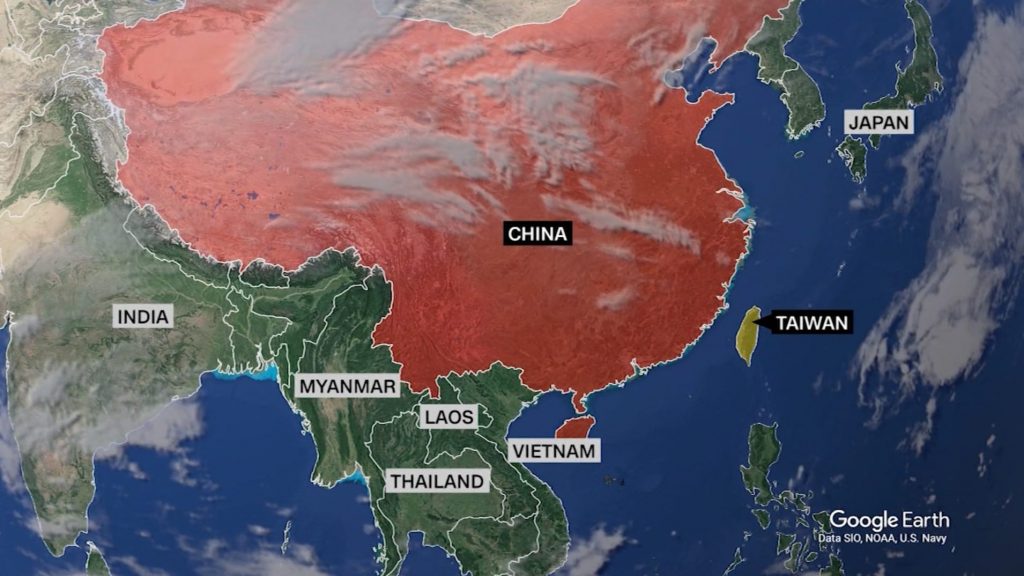 The Middle East and North Korea are the two hottest points of conflict in the world, but Taiwan, which rarely tops the news, represents the latent focus of tension and is like a volcano that may erupt without introduction, and the result is a war between America and China in which the end of the world may be, so what is the story?

The American magazine The Atlantic published a report entitled: “A look at the scene in Taiwan,” which sheds light on the nature of the relationship between Taiwan and China, the change in the dynamic of that relationship, and the danger of American preoccupation with what is happening on the flaming borders there.

A tension point that has not witnessed any conflict

Taiwan is the point that has never experienced any tension. A dispute over the island’s fate could have turned into a conflict between China and the United States decades ago. But the feared Chinese invasion never came. For so long, the situation has been at a standstill, with Taiwan’s stalemate often shifting gradually into the context of Asian issues, overshadowed by seemingly more important matters such as North Korea’s nuclear ambitions and simmering tensions between India and Pakistan in Kashmir.

Not now. With US President Donald Trump distracted by the coronavirus pandemic, in addition to his poor health, and already withdrawing from Asian issues, concerns have mounted about the US commitment to defending the region. By contrast, China is increasingly asserting its influence, following a crackdown in Hong Kong. Kong — in which China has enacted a strict and extensive national security law — with little, if any, real repercussions on the part of the international community. As a result, some Taiwan watchers, and the island’s own officials, are concerned about the growing possibilities of war over control of the island, whether unintentionally or even deliberately launched by Beijing.

“It has become more and more worrying,” Taiwan’s foreign minister, Joseph Wu, said. He said he was “deeply concerned” about the possibility that Beijing would use its longstanding claim to Taiwan as a “very good argument for an attack”. Warning lights flash in Washington, D.C.; Senator Josh Hawley and Representative Mike Gallagher have introduced legislation in recent months to bolster Washington’s (somewhat ambiguous) pledge to protect Taiwan. “No one can be under the illusion that the Communist Party of China may unite peacefully with Taiwan,” Gallagher said in a statement.

What is the origin of the tension between Taiwan and China?

In such an old conflict, with so many scars and fears, it can be hard to tell when to sound the alarm, as the Taiwan-related tensions date back to 1949, when the Communists led by Mao Zedong succeeded in defeating the Nationalists under Chiang Kai-shek. In a bloody civil war and forced them to flee from mainland China to the island of Taiwan, there the nationalists re-established the rival Republic of China in the capital, Taipei, and the People’s Republic of China never relinquished its claim to Taiwan, which Beijing considers only a rebellious province, which makes the possibilities of a war cloud on the area. Perhaps this current wave of tension is just another round of taking a political position and threatening to use military force.

But China is clearly increasing pressure on Taiwan. In recent weeks, the Chinese military has conducted exercises and exercises unusually close to Taiwan, both in the air and at sea. Last month, Beijing made it clear that it denied the existence of an unofficial border in the Taiwan Strait that has ensured a measure of stability along the heavily fortified waterway. Recently, a Chinese Defense Ministry spokesman warned Taiwan: “Those who play with fire will surely get burned.”

Some Taiwan experts are not convinced that the Chinese president’s goal is open and all-out war. Xi Jinping would be very risky in invading Taiwan. If an attack fails, or lasts a long time and is too costly, this step may be counterproductive.

For Richard Bush, a non-resident senior fellow at the Brookings Institution and a longtime expert on Taiwan, Xi Jinping’s intense pressure is not a prelude to war, but part of a longer-term, less risky strategy designed to undermine confidence in the Taiwan government and its resilience against China. And he said, “You’re putting a lot of pressure on everyone you should intimidate.”

Nevertheless, the growing anxiety reveals the uncertainty surrounding global security resulting from the change in the balance of power and the collapse of the American world order. Since the end of World War II in the Pacific region, the Asian conditions, although not calm all the time, were at least expected to an extent: Washington has forged a system of alliances, backed by consistent principles of US foreign policy and military presence, that has cemented US influence in the region and given enough stability for Asian countries – including China – to thrive.

This system is currently experiencing difficulties. China, which has regained its strength, is competing with America’s hegemony in Asia and trying to reassert its historical position as the dominant power in the region. In Washington, isolationists, led by Trump, question the purpose and importance of fulfilling Cold War-era commitments in Asia and around the world. This combination reinforces doubts that the US security system can or will be able to withstand.

Easy arena to confirm the rise of the dragon

Taiwan is one layer of this system that may be splintered under the weight of this geopolitical confusion. Both Beijing and Washington are experiencing a power struggle more intense than they have been in decades, driven by political change at home. The biggest changes were in China in which President Xi Jinping worked to reshape the communist government by amassing more power than any other leader since Mao himself. Wu told me that he sees this development as a major reason behind the new tensions. “The Chinese political system has changed…the political power has settled in the hands of one person, and that involves all kinds of dangers,” he said.

To justify his seizure of power, Xi has presented himself to his supporters at home as the greatest defender of China’s national interests and as the man who will make China great again internationally. The rule of one person for Xi has also created a situation in which no one is responsible for anything else. When things go well, he can win all the praise, and when things go wrong he can be blamed alone. At the moment, the situation in China is far from right. The coronavirus pandemic has left the country deeply destabilized and mired in probably the worst economic downturn in China since market-friendly economic reforms began in the early 1980s. These problems would make Taiwan an especially attractive target, a way to bolster Xi’s standing at home and refining him as a champion of nationalism.