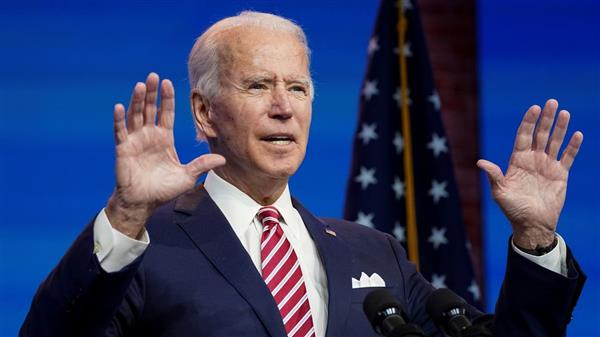 China seems to be the most important nightmare that occupies President Biden during 2021, even if he mentioned it in his first conference at the end of last January, when the observers came out with a kind of astonishment because the man talked about all the problems of the United States except for China.

Indeed, on the same day of that conference, Beijing denied a report in the Wall Street Journal that it had pushed for a high-level meeting to ease tensions with the United States.

The Chinese embassy in Washington said at the time: “The Chinese side did not write any of the messages mentioned in the Wall Street Journal report,” and “the logical relationship between China and America serves the fundamental interests of the two peoples, and lives up to the general aspirations of the international community, and China hopes that the American side will work with its Chinese counterpart to find a solution.” Middle and uphold the spirit of non-conflict, non-confrontation, mutual respect and cooperation that achieves gains for both parties, focus on cooperation, address differences and achieve logical and stable development in their bilateral relations.

Then came the first conference of the US president-elect, who reiterated that he, like his predecessor, Donald Trump, intends to confront China, but in a completely different way from the Republican billionaire’s, which was characterized by a direct confrontation between the two largest economic powers in the world.

Now it can be said that the last quarter of this year bore the clearest pictures of what we might call (the expected cold war between Biden and China). In early September, Washington announced the formation of a strategic security alliance in the Indo-Pacific region, comprising the United States, Britain and Australia.

It was also noted that none of the three leaders mentioned China in their press conference, nor did their joint statement, which merely referred to “peace and stability in the Indo-Pacific region”, but there is no doubt that this alliance aims above all to confront ambitions Beijing regional.

Only days after the establishment of the “Ocos” alliance, which angered the European allies and fell with it the last cards of absolute confidence in American protection, the global media was abuzz with the news of an alliance led by the United States as well, as President Joe Biden worked to strengthen the American presence in Southeast Asia, from During the close ties with India, Japan and Australia, in a bloc that appears completely different from the secrets it holds, it was established more than a decade and a half ago. Although the announced outlines of this new alliance revolve around strengthening ties and cooperation in various fields, including Ways to confront the Corona pandemic and find effective solutions to the issue of climate change.

It seems that the real intentions indicate that Washington aims through this new alliance to tighten the screws on the growing Chinese influence and try to curb Beijing.

In other words, there are many observers pointing out that the members of the “ASEAN” bloc, which includes about 10 countries from the Southeast Asian region, are concerned about the possibility of changing the course of the “Quad” alliance to other directions, especially since the American-led campaign against China could enter The region is in a state of instability, and the spread of alignments that could lead to a military escalation would harm the region and the world.

Here in Washington, I note that the hardening of relations with China is one of the rare issues on which bipartisan politicians in the United States agree.

We can clearly say that “Democratic President Joe Biden did not differ from the approach of his Republican predecessor, Donald Trump, in this regard.”

Despite the unprecedented high degree of polarization in the American political system today, there is a kind of consensus about the necessity of confronting China’s policies between Democrats and Republicans, and I think that there may be some relatively small differences between the two, but not as large as some might think. , in that Biden may try to engage more with China on some critical issues like climate change, but is likely to maintain a fairly robust approach toward China, like Trump, on technology issues, trade issues, and security issues.

In summary, it can be said that China’s paranoia over a whole year has been faced by President Biden, based on features that we can explore some of its interiors in the following points:

First: Seeking to develop plans that serve Washington’s interests in the regions neighboring China by mobilizing regional allies and helping them achieve their common interests with Washington in the face of China’s aspirations.

The aim may be to maintain “diplomatic, military, and economic supremacy in the region while preventing China from creating new illiberal spheres of influence.”

In a clearer sense, it seems that US President Joe Biden has taken a hard-line approach similar in nature to the directions of the previous administration led by Trump, yet he is trying to follow different ways in dealing with China. The Americans are aware of the difficulty of direct military interaction with the other superpower, and therefore restoring the strategy of military and economic alliances is the best way according to the current geopolitical data, in addition to pushing the traditional partners to take clearer positions against China.

Second: Sending contradictory signals about the start of a cold war between Beijing and Washington at a time when they represent the two largest economies in the world, with the deepening of competition and clashing on ideological, military and technological bases.

But the truth, in my opinion, is that we are in the process of a new Cold War, but it is not like the Soviet-American Cold War, because the economies of the two countries are intertwined in a very complex way.

China is not the closed Soviet Union, and America and the West cannot follow a policy of containing China by restricting it, because the volume of trade between the two countries reached nearly $560 billion in 2020.

Third: 2022 seems to be the year of trying to take painkillers to confront Chinese paranoia. There is no doubt that managing a strategic competition between the United States as a superpower that has been exhausted by wars, and China, as a power that is panting on the way to the top, requires first re-arranging the priorities of competition that can only affect the world from one extreme to the other.