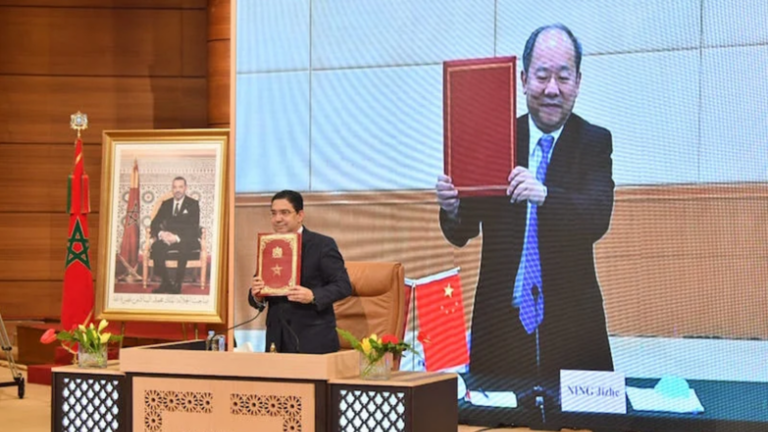 The Minister of Foreign Affairs, African Cooperation and Moroccan Expatriates, Mr. Nasser Bourita, and the Vice-Chairman of the Chinese National Commission for Reform and Development (NCRD), Mr. Ning Jizhe, signed during a videoconference, on January 5, 2022, the convention on the Implementation Plan on Jointly Building the Belt and Rod Initiative between Morocco and China.

During this ceremony organized by videoconference, Mr. Nasser Bourita welcomed the depth of the friendly relations between Morocco and China, in line with the vision of the two Heads of State, His Majesty King Mohammed VI and the Chinese President Xi Jinping, declaring that since the Royal visit in May 2016, the two countries have entered a new era in their diplomatic relations which date back to 1958.

The historic visit of His Majesty the King to Beijing was a pivotal step which resulted in the signing of the Joint Declaration on the establishment of the strategic partnership between Morocco and China. This document remains, to date, one of the very few legal instruments signed personally by His Majesty the King, which evidences its great importance to Morocco. It has given an unprecedented impetus to the Morocco-China friendship, and yielded tangible results, added Mr. Bourita.

The minister also highlighted the fact that Morocco was the first country in the Maghreb and among the first in Africa to adhere to the Belt and Road initiative, hence raising the Moroccan-Chinese strategic partnership to a new higher level.

Mr. Bourita noted that this convention aims to promote access to the Chinese financing provided by the Belt and Road initiative, for the establishment of large-scale projects in Morocco, the facilitation of trade and joint ventures in different fields such as industry, energy, Research and Development, technological and technical cooperation as well as vocational training.

The minister recalled Morocco’s high appreciation for the responsiveness of the Chinese authorities in their support by meeting Morocco’s needs in terms of medical equipment and vaccines, as part of the far-sighted Royal management of the pandemic.

“Building on this steady success, we have taken a further step by establishing an industrial unit for the fill and finish manufacturing in Morocco of the anti-covid-19 vaccine, which benefits from a pioneering partnership with the Chinese state-owned company, Sinopharm.”, the minister added.

Mr. Bourita also stressed that the Moroccan-Chinese partnership draws its strength from openness to Africa. Morocco has repeatedly called that Africa be treated as an equal partner and be seen for what it is, that is the reservoir of the world’s youth with a population of nearly 2.5 billion people in 2050, and more than a quarter of the United Nations membership.

Morocco considers that the Belt and Road opens up new perspectives in terms of trade and investment, and brings additional opportunities consistent with kingdom’s New Development Model, he concluded.

Mr. Ning Jizhe affirmed that the Belt and Road initiative, which carries the spirit of peace and cooperation, openness and inclusion as well as mutual learning, brings new impetus for a deeper cooperation and marks a new era in Moroccan-Chinese relations.

He indicated that political consultations became smoother when His Majesty King Mohammed VI and President Xi Jinping upgraded bilateral diplomatic relations to the level of strategic partnership in May 2016.

In 2020, bilateral trade reached 4.76 billion USD with an increase of 2% compared to last year. Despite the COVID-19 pandemic and an international trade crisis, the Moroccan-Chinese cooperation has improved in terms of quality and efficiency, noted the NCRD’s Vice-Chairman.

The Chinese official recalled that Morocco is the only country in the region to have 3 Confucius institutes, participating in cultivating multiple civil emissaries of friendship between China and Morocco.

Referring to the attachment of His Majesty King Mohammed VI and President Xi Jinping to the bilateral strategic partnership, Mr. Ning indicated that Morocco is an influential cooperation partner within the framework of the Belt and Road Initiative.

Based on dialogue, partnership, commercial and human exchanges, the Belt and Road initiative has strengthened infrastructure cooperation with China and has made Morocco a privileged destination for Chinese investments in Africa, with more than 80 major projects across the country.