Collision or Rapprochement – What will the relationship between Washington and Beijing be like in 2022? 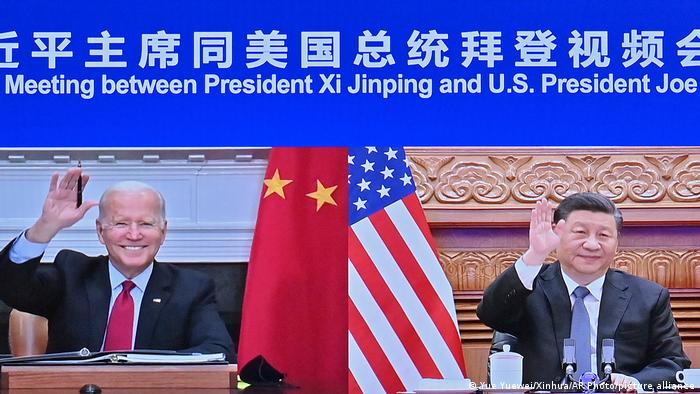 The competition and rivalry between the United States and China reached unprecedented high levels this year, as the two countries remained locked in economic, military and trade policies characterized by hostility and suspicion.

In light of these data, it is likely that this will continue during the next year, especially since the United States, despite the competition between the Democratic and Republican parties with the upcoming midterm elections for Congress, there is an implicit agreement between the leaders of the two parties not to compromise with China.

In China, President Xi Jinping will continue to consolidate his grip on power and show his strength at the Communist Party Congress in October next year, especially with the party’s full support for Xi’s hard-line policies.

The US announcement of a “diplomatic boycott” of the Winter Olympics in China heralds a tense start in relations between Washington and Beijing.

Britain, Australia and Canada have joined the diplomatic boycott announced by the administration of US President Joe Biden, which is not to send officials to this sporting event, despite the participation of athletes from the four countries.

China did not stand idly by as it threatened “consequences” against the diplomatic boycott.

And with the Winter Olympics approaching next February, it seems likely that the tension between the two countries will escalate as the United States tries to use a “diplomatic boycott” to draw attention to the plight of the Muslim Uighur minority in China’s Xinjiang region.

The list of crises in the relations between the United States and China includes geopolitical issues, especially in Taiwan and also Hong Kong, where China is still pressuring civil liberties on the island, and this is expected to continue during the next year, 2022.

“I think the tension between China and the United States will continue next year, especially in the areas of human rights and geopolitical and security issues,” said Wu Qiang, from Beijing, who specializes in commenting on political affairs.

“This situation is acceptable to the leadership of the two countries, so I do not think that the leadership of both countries will take any effective measures to reduce tension, but they will work to prevent this tension out of control,” he added.

Conflict in Taiwan is Unlikely

The situation in Taiwan is one of the causes of concern and tension between China and the United States in light of Chinese movements near Taiwan, which is carefully monitoring hundreds of sorties by Chinese aircraft in recent months in the Taiwanese air defense zone.

The United States also angered China this year by sending unofficial delegations of American representatives to Taiwan, where they expressed their support for the Taiwan government and the country’s President Tsai Ing-wen.

China considers Taiwan an inalienable part of its territory and has vowed to return it to its sovereignty one day by force if necessary, so Beijing is suspicious of any reference to Taiwan independence.

In light of this, China’s policies next year are expected to move forward in opposing any attempts by Taiwan to gain diplomatic recognition and also thwarting Taiwan’s attempts to join international organizations.

With the continuing tension in the Taiwan Strait, the possibility of China launching a military invasion is seen as the most dangerous shift in tension between China and the United States, especially as it may herald military confrontations between the two countries.

However, it seems that the ruling Communist Party in China is willing to calm down and stabilize, despite the escalating tone that was described as a “rattle of swords”, especially as it prepares for its annual conference.

“The risk of China launching an attack on Taiwan before the 20th Communist Party Congress in the fall of 2022 is extremely low,” says Bonnie Glaser, director of the Asia Program at the German Marshall Fund of the United States.

In an interview with DW, she added, “It is unlikely that Xi Jinping (Chinese President) will take this risk that may threaten his efforts to stay in power for a third five-year term.”

It is noteworthy that China claims the Taiwan Strait, which separates mainland China from the island of Taiwan, while the United States and other countries say that this area is located in international waters, so it is open to all.

With regard to the South China Sea in general, the United States and its allies will continue to carry out exercises that it says are to ensure freedom of navigation in the international waters claimed by Beijing.

On the other hand, China will continue to strengthen and develop its naval fleet to defend its interests, but all parties do not want a sea conflict.

The tension between the United States and China does not depend on geopolitical issues, especially in Taiwan and the South China Sea, as cyber security issues are among the concerns between the two countries as well and cast a shadow over economic and strategic policy.

This year, the United States accused China of being behind cyber attacks and massive data breaches targeting American institutions and economic entities.

In light of this, it seems that the United States’ drive to rein in Chinese technology and isolate it from the rest of the world will continue over the next year, especially as Washington continues to put obstacles in the way of Chinese companies acquiring important American-made industrial components and devices.

In this context, Glaser said, “The United States is just beginning to implement stricter restrictions on technology transfer to China, so it is expected to impose more restrictions over the next year.”

Glaser revealed that during 2022, the US Department of Defense (the Pentagon) is expected to work to fill the regulatory loopholes that allowed, for example, the “SMIC” company to manufacture semiconductors (semiconductor), which is the largest chip maker in China, to purchase important American technology.

She added that other Chinese companies and economic entities are likely to be added to the blacklist of the US Department of Commerce, noting that there is a discussion about export controls between the United States and its allies in addition to scrutiny of foreign direct investment issues in China.

The Chinese and US measures will negatively affect foreign investment in Chinese companies, which will make international investors wary next year.

Economists expect China’s economic expansion to slow over the next year, with some estimates suggesting growth will not exceed 5% next year.

In that, some analysts believe that this may push China to work with the United States to ease trade restrictions imposed by the administration of former President Donald Trump on Chinese companies.

During the virtual summit last month, US President Joe Biden and his Chinese counterpart Xi pledged to ensure that the competition between the two countries “will not stray into open conflict.”

However, observers cast doubt on the ability and ability of the two countries to overcome their differences amicably.

In this context, Shen Ling, an expert on economic issues at East China University of Science and Technology, believes that any easing of economic and trade tensions between China and the United States “may be temporary.”

“Confrontation will remain the main topic. Given the variables of economic parameters between the two countries, China is now closer to the United States than ever before in terms of economic power. So competition – not cooperation – will be a feature of bilateral relations,” he added.

As for Bonnie Glaser, director of the Asia Program at the German Marshall Fund in the United States, she points out that domestic politics in both countries is likely to affect the shape of relations between the United States and China next year, especially with the Chinese Communist Party organizing its annual conference and holding the midterm elections in the United States. .

“In light of this, we are not very optimistic about significant progress on any issue. However, it will be possible for the United States and China to make some agreements if it is in the interests of both countries,” she added.