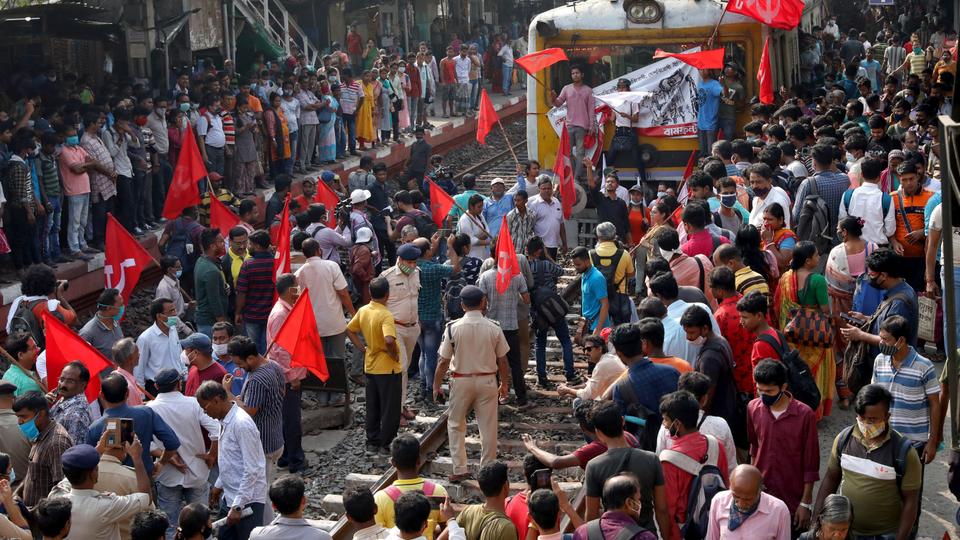 Nearly a dozen unions have organised a nationwide two-day strike, with universal security coverage and an increased minimum wage on the list of demands.

Millions of workers have begun a nationwide two-day strike across India to express their anger at the government’s economic policies and press their demands for improved rights for industrial workers, employees and farmers.

About a dozen labour unions that organised the strike on Monday want the government to provide universal social security coverage for workers in the vast unorganised sector, hike the minimum wage under a flagship employment guarantee program and stop the privatisation of public-sector banks.

The strikers are also demanding that the government halt plans to sell state assets.

The strike had little impact in India’s capital, New Delhi, and the financial hub of Mumbai, but daily life was affected elsewhere, including southern Kerala, where the state government led by the opposition Communist Party of India backed the protest.

Banking and transportation expected to be impacted

The All Indian Trade Union Congress, one of the country’s largest trade unions, said it expected more than 200 million formal and informal workers would join the strike, but the figure could not be independently verified.

Essential services related to banking, transportation, railways and electricity were expected to be impacted in several states.

A number of public-sector banks, including India’s largest lender, the state-run State Bank of India, said banking services may be affected because many employees were expected to join the strike.

India’s economy has bounced back after experiencing a major blow during the first two years of the pandemic. But many jobs have disappeared, with unemployment rising to 8 percent in December.

The protests by farmers, who feared the laws would dramatically reduce their incomes, forced Modi to make a rare retreat just ahead of crucial state elections that his party eventually won.