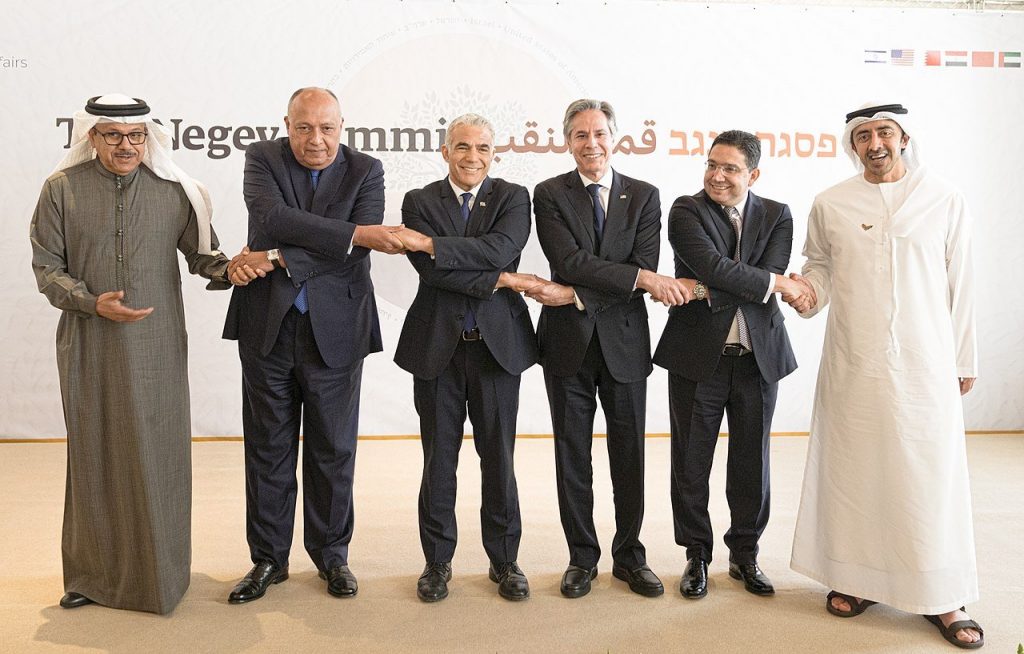 t was noticeable during the Negev Summit, which took place at the end March, that frown on the face of the Egyptian Foreign Minister Sameh Shoukry, unlike his colleagues, from the UAE, Bahrain and the United States, particularly in the memorial photo while they were holding each other’s hands as an expression of solidarity. Sameh Shoukry’s equivocal smile summed up many meanings that should not be skipped.

Egypt appears inconsistent with the general scene, because its interests as a major state in the region often conflict with Israel. Cairo considers itself the leader of the Arab world, and therefore it is not pleased that the Israeli side takes the initiative to play this role, which it considers one of its most important rights and privileges. The Egyptian peace was a peace aimed at repelling Israel’s harms represented by permanent attrition through wars and to satisfy the largest power in the world “the United States”, and not to make it the master of the region, and therefore it was always a cold peace.

Are the Israelis ready to fight the wars of others?
On the other hand, the Emirati and Bahraini peace aims to benefit from Israel’s military power in the face of Iran, in addition to its preference with the American administration and its ability to influence the American decision related to the Middle East in favor of these countries. Therefore, they are interested in a warmer relationship than the one that Egypt has forged.

The Israelis have been talking about the Iranian nuclear threat since the beginning of the nineties of the last century, and to this day we have not seen this alleged threat in reality, while it is widely believed that Israel is the only one possessing nuclear weapons in the Middle East.

Israel had succeeded before in sabotaging the international nuclear agreement with Iran led by the United States of America, and despite that, Iranian power did not retreat. On the contrary, the American blockade of Iran made the allies of the United States who depend on Iranian oil, suffer from economic difficulties, and here is Israel once again, trying to put sticks in the wheels, as she believes that the nuclear agreement with Iran is at the door.

Israel is trying to play on all the ropes as always, as we have seen how it followed a slippery policy in the recent Russian-Ukrainian confrontation, trying not to anger any of the United States of America, Russia or Ukraine, and it also follows the same method in its relationship with China.

The alleged interests between Israel and the Gulf states are certainly not economic interests. These countries, especially the UAE, have the economic capacity, which makes them not in need for the investments and money expected to be reaped from Israel. Rather, they are security interests in the first and last place, due to these countries’ sense of the decline in American interest in the region, and their fear from the disappearance of the American security umbrella. This might explain why we witnessed a shift in their policy towards both China and Russia, which have become warmer recently, and here we understand how and why these countries meet with Israel. What unites these countries is the same concern about a region that is not under American protection, dominated by large regional countries such as Iran, while we do not find the same concern in Egypt, which clearly expressed this position.

Although the leaders of the three countries chose to focus on the Iranian threat, the Egyptian foreign minister chose to disagree and assert that his interests do not necessarily coincide with the interests of Israel, the UAE and Bahrain, and therefore he stressed that he did not come to build alliances against anyone.

It was noticeable that the parties concerned with the relationship with Israel were absent from the meeting, if we exclude Egypt. Syria and Lebanon, of course, had never had a relationship with Israel. However, it is noteworthy that Jordan, which has the longest border line with Israel, and the Palestinian Authority, which is the first concerned, were absent from the meeting. The Palestinian Authority, in the words of its Prime Minister, Mohammad Shtayyeh, sharply criticized the Arab countries participating in the summit.

Moreover, since the beginning of the Arab-Israeli conflict, Egypt has tried to make itself the exclusive gateway to the Palestinian issue, and for this purpose it has waged conflicts with the Palestinian factions themselves and the neighboring countries. It considers this file as one of the important papers left in its hand in light of the decline in its influence in Africa and the region.

So why did Sameh Shoukry come to the meeting despite all these considerations that were mentioned?
It can be said that the regime of President Abdel Fattah El-Sisi has overcome the legitimacy crisis that faced him at the beginning of his rule, and his opponents from the Muslim Brotherhood and the rest of the revolution forces have become a memory from the past or almost, but the first challenge today before the Egyptian state is the challenge of development and economic prosperity that Sisi has always promised the people Despite the remarkable achievements made by the Sisi regime in the field of roads and infrastructure, the Egyptian economy is still a fragile economy that needs external support, which usually comes from the Gulf countries.

The period of the Corona epidemic was harsh for many economies, and the military confrontation in Ukraine came to make matters worse, so the energy and food bills rose significantly, which affected the price of the Egyptian pound. In light of a situation of this kind that could destabilize Egypt, the conservative Egyptian stance towards Israel and the roles major states play in the region, tolerates this kind of maneuvering mixed with resentment.

There is no doubt that the Gulf states and the Israelis are aware that Egypt is not incapable of repositioning at any time, and re-mixing the many cards in its hands, especially the card of the relationship with Turkey, which has great ambitions in the eastern Mediterranean, and could easily meet with Egyptian interests.

So, is it possible to rely on the Gulf and Moroccan role, or is the correct title still in Egypt and Turkey? The Israelis must know exactly what is going on at the regional and local level, and that the redistribution of roles can happen at any time and is not likely to be in their favor, but they seem to think that they still have some time before the tightrope game is over.