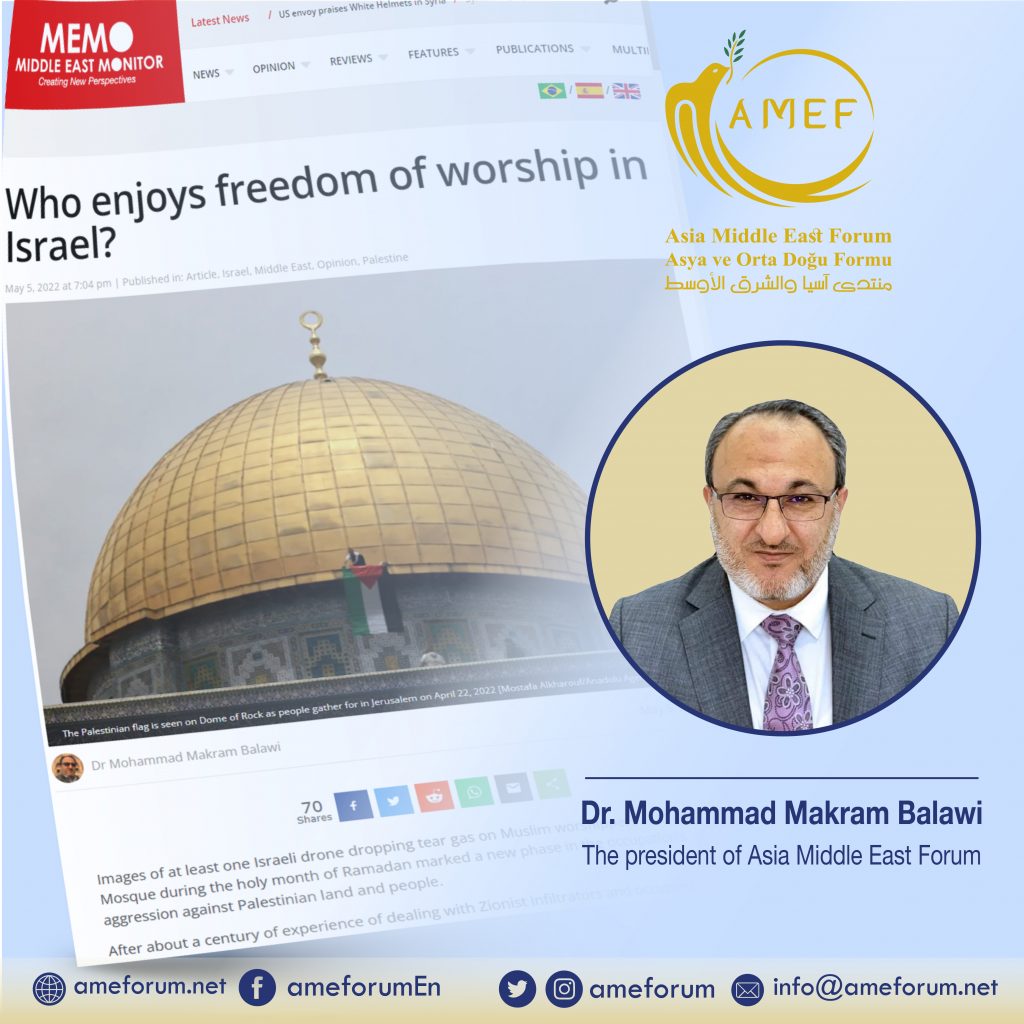 Images of at least one Israeli drone dropping tear gas on Muslim worshippers at Al-Aqsa Mosque during the holy month of Ramadan marked a new phase in the occupation’s aggression against Palestinian land and people.

After about a century of experience of dealing with Zionist infiltrators and occupiers, Palestinians have become very aware of their tactics and strategies: Invent a story based on myth and crocked logic, use force to implement it, turn basic facts into disputed issues with the help of foreign powers and the media, change realties on the ground one by one, play the role of the victim, accuse whoever dares to oppose you of being terrorists, shot them or imprison them, then move to another issue and repeat the process.

We have now seen countless incidents where Muslims were forbidden from reaching Jerusalem’s Old City, let alone reaching Al-Aqsa Mosque. Israel worked systematically to divide Palestinian land and isolate Palestinians. Palestinians in Gaza are unable to visit the occupied West Bank or Al-Aqsa, while checkpoints across the West Bank limit the freedom of movement of Palestinians in the occupied territories to the extent that many do not have access to his own agricultural land.

This, along with the illegal Separation Wall which Israel erected on land belonging to the West Bank, stifle Palestinian life, and their ability to worship at their holy sites.

In spite of all these obstacles, some 250,000 Muslims gathered at Al-Aqsa Mosque to pray and mark Laylat Al-Qadr (the Night of Power) during Ramadan.

In another troubling scene, Palestinian Christians were not allowed into their church in Jerusalem by the Israeli occupation police, while foreigners were welcomed in. The Israeli occupation’s police lined people up into two lines, one for foreigners and the other for Palestinians and all those who speak Arabic. The latter, police mandated, were not allowed into the church.

Christian endowments in Jerusalem are systematically targeted by the Israeli occupation to change the identity of the holy city and empty the holy land of Christians.

Meanwhile, Jewish Israeli fanatics are allowed to desecrate Muslim and Christian holy sites. Their recent actions, over Ramadan and Easter, were about to trigger another war, as they did last year. Yet, their actions are not isolated from the mainstream politics in Israel which believes in a “Jewish State” in the literal sense of the word.

While in March, the Knesset passed a law which according to Jerusalem Post, “aimed at tightening immigration controls and making it harder for Palestinians who marry Israeli Arabs to receive citizenship.”

Through its legislation and the actions of its citizens, which are approved and allowed to occur as a result of the security and political classes’ support, Israel is ensuring that only Jews and tourists – to whom it is showcasing it’s ‘democratic values’ – are allowed freedom of worship.

Elsewhere, Israel is working relentlessly to perpetuate its illegal occupation and impose its sovereignty over the whole land of Palestine, especially the holy sites, otherwise the Zionist mission will never be complete.