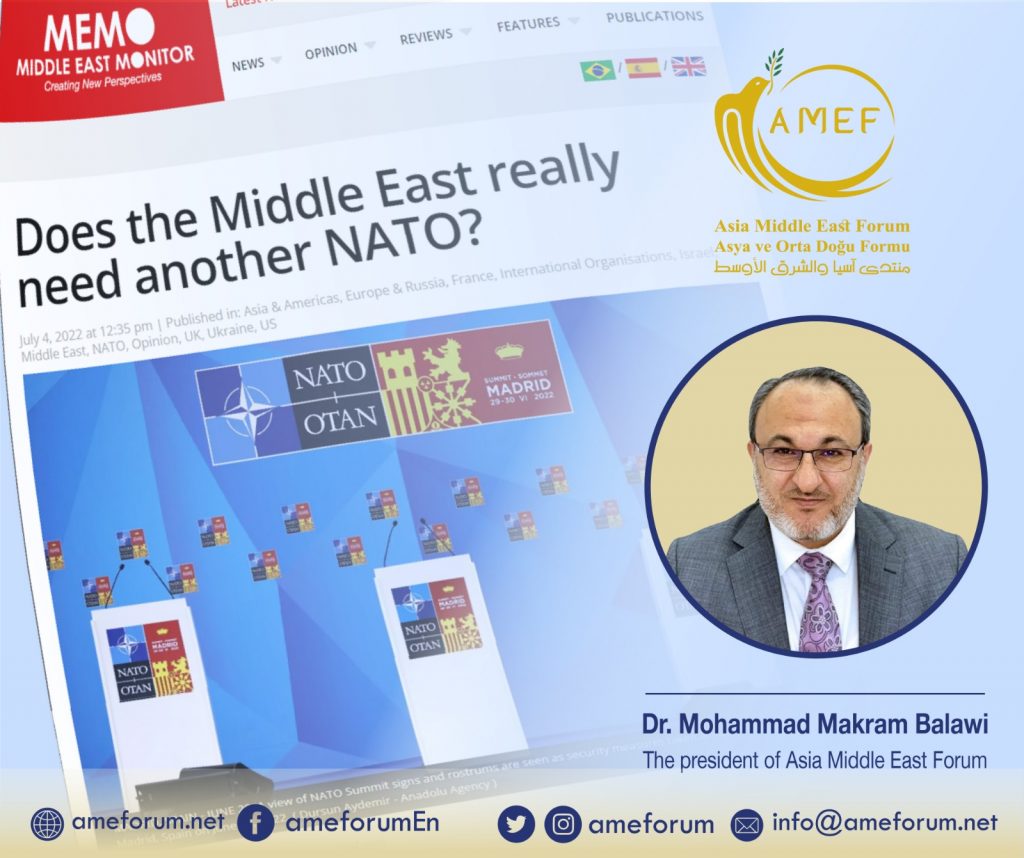 US President Joe Biden’s upcoming visit to the Middle East has generated a lot of discussion in the region, not least because he has said that he will initiate a security coalition between Israel and some Arab countries, to confront any destabilising threats. This has been dubbed the “Middle East NATO” and raises some basic questions, such as why should there even be such a coalition. Who will it be directed against, and is NATO in any case a successful model to replicate elsewhere? Moreover, does the Arab world really need such a coalition, and what will Israel’s role be?

It is true that the Middle East suffers from a myriad of interrelated problems that caused instability and suffering throughout most of the 20th century and continue to do so. The lack of real political independence, bad governance, power struggles, border disputes, proxy wars, terrorism, failed economies, poverty and deprivation, unemployment, corruption, domestic violence and migration are just a few of these problems.

However, what is the major root cause? Although the West believes in market policies and the ability of the market to correct itself, this is not allowed to apply to the Middle East, because the region has never been left to decide its own destiny depending on internal dynamics; foreign colonial hands have dictated terms and conditions. Regional borders were decided by colonial powers — Britain and France — drawing lines on a map during World War One in advance of dismantling the Ottoman Empire. The 1916 Sykes-Picot Agreement was then used post-war to divide and rule.

Western colonial powers, including the US, have worked systematically to jeopardise any real regional independence efforts, working with local despots and reactionaries to keep national interests and dreams unfulfilled. They even collaborated with opponents of democracy and freedom in return for their loyalty, regardless of their lack of popularity and legitimacy. As a result, regional regimes are able to operate without any form of popular accountability; they are built not on efficiency and patriotism, but loyalty.

Such political systems were never meant to build modern states for free people; their wealth has been squandered on family members and loyal servants, and to create a facade of modernity such as tall buildings and golf courses. Good governance is lacking, and they are failed states in almost every aspect, despite their ancient civilisations.

The added problem, of course, was the creation and imposition in the region of the Zionist state of Israel. It was created as a settler-colonial outpost to impose the West’s will on the region, and the colonial states in the West have engineered regional governments to ensure that Israel is kept safe and remains the most powerful country in the Middle East. No Arab state has been allowed to be strong enough to pose a threat to the Zionist state, be it Egypt under Nasser, or Iraq under Saddam Hussein, or Iran under the Islamic Republic regime; or even Erdogan’s Turkiye. All have to be pruned and, if necessary, uprooted, to maintain Israel’s hegemonic position.

As such, the root cause of most of the problems in the region is foreign interference, especially from America. Iran, whether we like it or not, is an integral part of the region, and has always been there. The major Arab states have always had enough strength and political will to stand up to Tehran’s ambitions and live side by side with Iran. The same applies to the other regional powers, Egypt and Turkey. These three used to find ways to resolve their differences and problems, most of the time peacefully, and sometimes by force, just like the Europeans. As long as foreign powers, including Israel, meddle in the affairs of the region, however, the present situation will continue to be an issue for all, not least those on the other side of the Mediterranean.

NATO was built on the basis of there being two superpowers, and made people and states ready for war at any time. The expansion of the organisation was — whether the West agrees or not — the reason for the military confrontation in Ukraine, as it provoked Russia. It might still lead to another world war.

Why do we need such an organisation in our region? The very idea is a bad omen, because it suggests that war is inevitable; a sign that more and more of our declining natural resources and wealth will be plundered and end up in American pockets as our regimes buy more weapons and build bigger armies and security forces that will be used to fight new wars or to suppress their own people who yearn for freedom and democracy. We have seen a lot of that in recent times.

READ: Mali has become another front in the Russia v NATO war in Ukraine

The Middle East has suffered enough at the hands of foreign powers and their allies. It is high time that they leave us alone to rebuild our region where we, not them, have to live and work. Until and unless that happens, at the very least Europe can expect to see millions more migrants making every possible effort to cross its borders in search of peace and security for their families. The West can’t say that it hasn’t been warned.