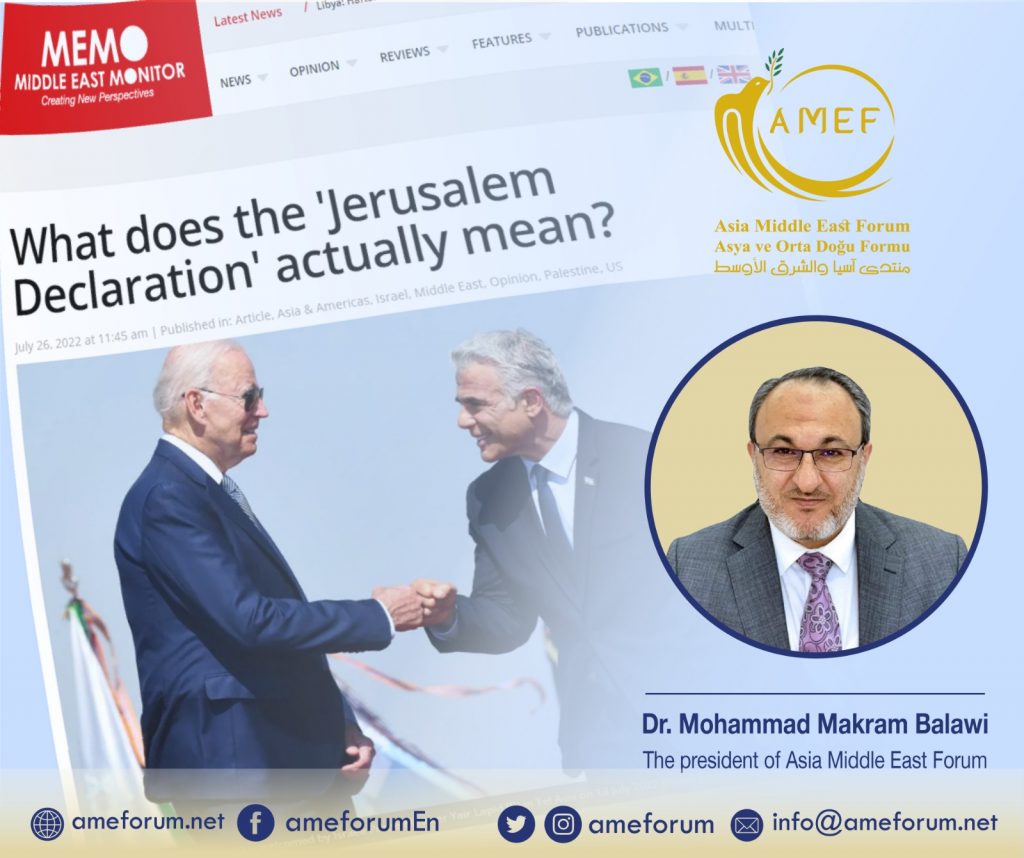 A linguistic analysis of the “Jerusalem Declaration” signed by US President Joe Biden and Israeli Prime Minister Yair Lapid on 14 July exposes the nature of the document. It is clear that Lapid is being marketed as a long-term prime minister in advance of the next General Election in Israel, with the declaration stressing the most important issues that concern Israeli voters as the continuity of US patronage, security and installing Israel as the regional hegemonic state.

Although the document doesn’t represent any real change or development in the nature of US-Israel relations, it created the impression of being an extraordinary development by using an abundance of positive adjectives to describe the relationship and related matters. I counted at least 30, including unbreakable, enduring, shared values and interests, unwavering, longstanding, unshakable, steadfast, indispensable and unparalleled. Moreover, it had the gall to claim that relations with the occupation state are moral, essential, incredible and extraordinary, alongside the usual strategic, vital, unprecedented, enduring, landmark, historic, extensive, robust, longstanding, consistent, extensive, critical, groundbreaking, unique, extensive, outsized and remarkable. Giving $3 billion every year to a state that treats international law with contempt certainly is “incredible” and “remarkable”, if nothing else.

There are also many inferences related to the real goal of the declaration, which is obviously to address Israel’s sense of insecurity and its fear of losing US support. For example, while “economy” was mentioned twice; the word “security” was mentioned 12 times; “defence” and “support” five times each; “threat”, “terror or terrorist” three times each; and “military” twice. Even when peace is mentioned, it is in the context of normalisation with Arab countries or what the Americans call “integrating” Israel in the region. One of the interesting things within the same context is that while the Palestinian Authority, Israel’s supposed “partner for peace”, is mentioned once in the declaration, its political rival and Israel’s number one enemy, Hamas, is mentioned three times. Similarly, Israel’s supposed partners Egypt, Jordan, Saudi Arabia, Morocco and Bahrain were each only mentioned once, but arch enemy Iran got two mentions.

Furthermore, although the document is called the “Jerusalem Declaration”, it doesn’t mention anything about the situation in Jerusalem. And yet Israeli religious fanatics who are intent on painting Jerusalem with their brush, are storming one of Islam’s holiest places, Al-Aqsa Mosque, around the clock under the protection of the Israeli police and armed forces, and could well trigger another war, as happened last year. Nor did the document refer to Israel’s Judaisation of the illegally occupied city, let alone retract Donald Trump’s illegal relocation of the US Embassy from Tel Aviv to the holy city, or even suggest the reopening of the US Consulate which used to serve as the American Embassy in Palestine. The declaration simply used “Jerusalem” to tell the world that Israel, with US support, has created new facts on the ground in the occupied city and the status quo is dead, discussions about the city are over, and no matter what the international community, the UN Security Council and international law says, the Jerusalem file is closed forever.

Surprisingly, the document did not restrict itself to the usual rhetoric about democracy and freedom. Instead, it was charged with religious terminology and zeal, using the Hebrew expression Tikkun Olam — “saving the world” — which is the kind of language one doesn’t really expect to hear from Biden and Lapid; it is more suited to Trump and Benjamin Netanyahu.

Such talk about “saving the world” is darkly comedic, given that those who want to “save the world” are responsible for much instability and destruction. Israel was founded on the ethnic cleansing of Palestine; has been occupying the West Bank, Gaza Strip and Jerusalem for the past six decades; and was at war with all of its neighbours while turning itself into an apartheid state based not on citizenship, but on ethnicity and religion.

The US, of course, has a very long record of undermining foreign governments and occupying other countries; funding terrorist organisations, and sometimes creating them; misusing international organisations; and applying international laws selectively. Most pertinently in terms of “saving the world”, the US is one of the few countries to withdraw from the Paris Climate Accords, which are supposed to “save” the world from pollution caused by countries like America. And what is often overlooked is that the US is the only country ever to use nuclear weapons in war.

Biden has an ideological commitment to Israel. He is a self-confessed Zionist and keeps pointing out that, “You don’t need to be a Jew to be a Zionist.” He gave the game away when he said, “If there weren’t an Israel, we would have to invent one.” No wonder the occupation state is allowed to act with impunity.

The declared intent of the document — Israel’s integration in the region — is an indirect confession that Israel has failed as a state. Seventy-plus years after the foundation of the occupation state, the US still has to do its utmost to integrate Israel in the region. Where in the world, apart from Israel, does a state need the full might of the only global superpower in order to be “integrated” like this? That alone confirms that Israel is an alien state imposed where it doesn’t belong.