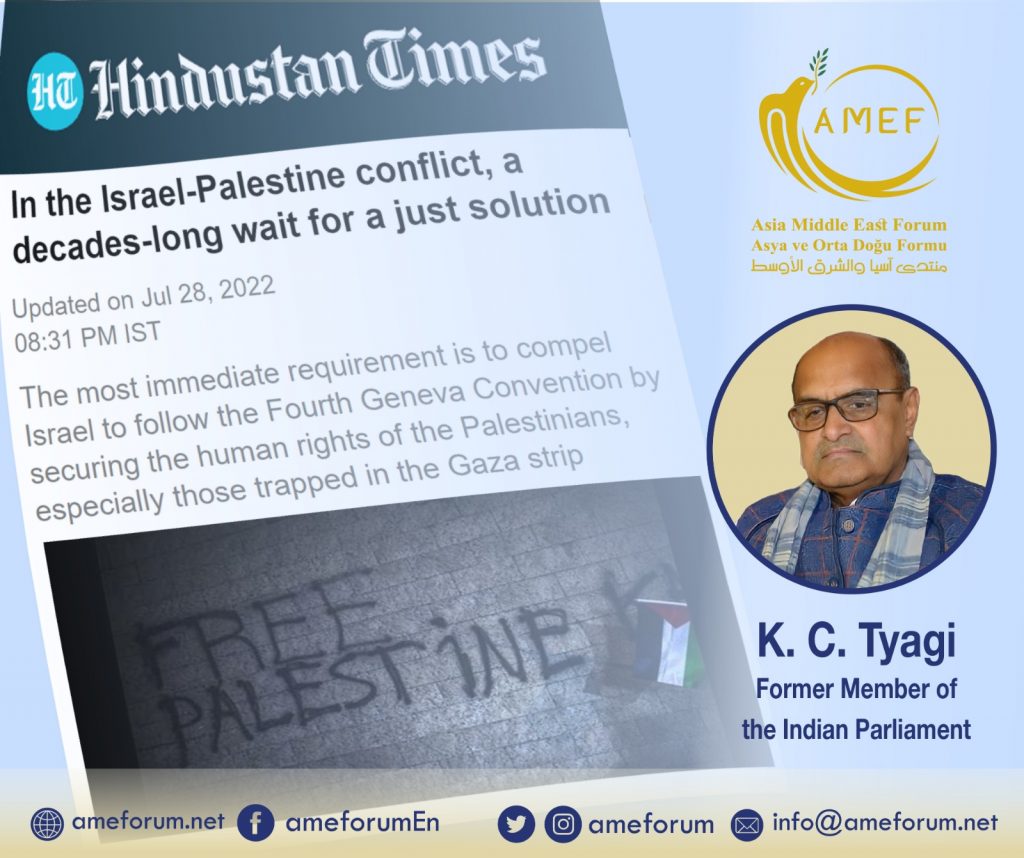 In a report released last month, the United Nations Commission for the Israel-Palestine conflict reiterated that Israel wants “complete control” of land owned by Palestinians. Step by step, Israel has been occupying Palestinian areas since its initial occupation in 1967. The commission also highlighted that Israel has been “acting to alter the demography through the maintenance of a repressive environment for Palestinians and a favourable environment for Israeli settlers.”

This is certainly not the first report by an intentional human rights entity or watchdog that underlines the Israeli zeal to occupy Palestinian areas. This is a disturbing truth that has prevailed for almost six decades. Anyone with an elementary understanding of geopolitics will know that Israel is not the central power working on the redundant mission to occupy Palestine. Instead, the source of its power lies in the West, especially in the United States (US). The US was one of the first countries to express its sympathy and tacit support for the Jewish State in 1948. By being the first country to recognise Israel officially, it played to further its interests in the West Asia/North Africa region. It has also provided billions of dollars in aid to Israel and a huge market for Israeli goods. Another reason behind the failure of efforts to secure the rights of Palestinians is the strong ties most of the European Union nations have with Israel, engineered by the US.

Israeli aggression has become more intense with the increasing rift among the Organisation for Islamic Cooperation (OIC) countries, especially the Gulf nations. The tussle between the Saudi-led bloc and the Qatar-led group has pushed the former, and the United Arab Emirates (UAE) closer to Israel; the UAE, along with a few other nations of the same bloc, have even established diplomatic ties with Israel a few months ago. The desperation to prevent Iran’s nuclear programme and create a bulwark against its regional dominance has compelled Saudi to ally with Israel. Besides, the world is aware of the rift between Turkey and Saudi Arabia, preventing the Muslim world from collectively calling out Israeli aggression.

The first prerogative for finding a solution to the Israel-Palestine conflict is an outlook based on human rights and not on interests.

Further, the global community should urgently restrict the US from becoming a stakeholder or a party to the conflict as it has always added fuel to the fire without any significant contribution. Most importantly, the world will have to recognise and realise that what has been done cannot be undone in a nuclear-weaponised world.

The world should try to establish an environment of peace by striking an equilibrium between the Jewish and the Palestinian people and ensure that Israel lays down its guns, enforces a ceasefire, and pledges not to further invade the remaining territory. Peace negotiations can then take place between the two nations, involving unbiased nations as parties to those negotiations.

However, the most immediate requirement is to compel Israel to follow the Fourth Geneva Convention by securing the human rights of the Palestinians, especially those trapped in the Gaza strip. Along with the Convention, Israel should also abide by the 2004 ruling of the International Court of Justice that asked it to protect the rights of the citizens of Palestine under its occupation as per humanitarian and human rights law. The global North should stop defending Israel and refrain from giving it licence to keep abusing the human rights of Palestinians.

It is high time for the world to ask itself if it has done enough for the human rights of Palestinians. Has it handled the situation efficiently and with integrity? It is indeed a time to introspect and ponder what former US President Ronald Reagan had once said – “Peace is not the absence of conflict, it is the ability to handle conflict by peaceful means”.