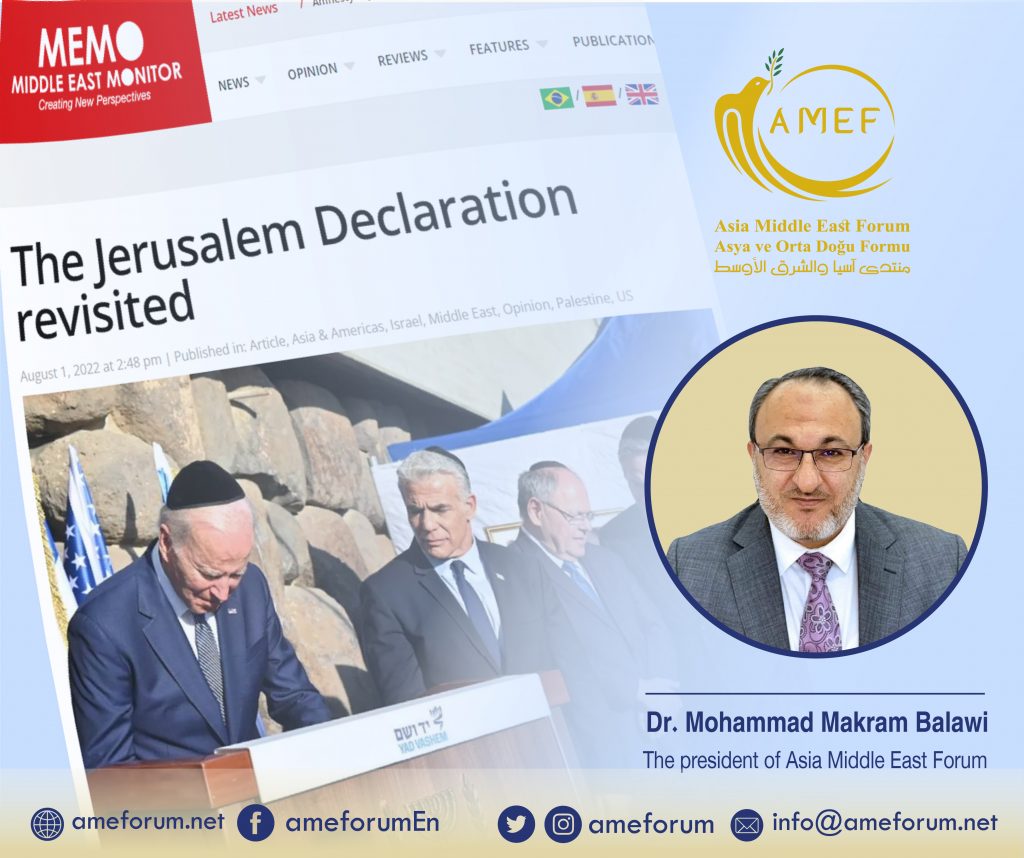 With Israel in its eighth decade, many worries and fears haunt its people. The curse of the eighth decade has become an obsession for the Israeli political elite, which is no surprise in a state based on religious mythology; it is bound to continue in the same vein. The so-called Jerusalem Declaration, signed by US President Joe Biden and Israeli Prime Minister Yair Lapid on 14 July, represents an attempt to provide Israel with some missing reassurance.

In the text of the declaration there are at least sixteen occasions when it stresses US compliance with Israeli demands. All represent US pledges in this respect, to the extent that it is very easy to think that it was written by Lapid and not a nameless US official.

The document keeps reiterating the importance of maintaining Israel’s security, and that the US will do its utmost to guarantee it, almost from the first paragraph to the last. In fact, the word “security” is mentioned thirteen times, as I mentioned in an earlier article for MEMO.

The document emphasises that even if, for any reason; the interests of the two sides do not converge, there is a more important reason to continue US support and aid for Israel. Both, we are told, share the same values: “An unwavering commitment to democracy, and the rule of law”, not to mention their shared desire to save the world.

Washington is committed to maintaining Israel’s military superiority in the Middle East. Moreover, “the United States reiterates its steadfast commitment to preserve and strengthen Israel’s capability to deter its enemies and to defend itself by itself against any threat or combination of threats.”

Due to increasing numbers of dissident voices in the Democratic Party calling for Israel to be held accountable for its crimes, there is a fear in the occupation state that the Democrats might not be so enthusiastic to give it the blank cheque that it is used to getting from both major parties in America. And that it may, at some point, lose US support if Democrat policies change. Hence, Israelis were anxious to get a clear commitment that the unconditional support for Israel is a matter of political agreement in the US. They got it in the Jerusalem Declaration: “The United States further reiterates that these commitments are bipartisan and sacrosanct.” It is repeated elsewhere in the document: “The United States and Israel note that nothing better reflects the steadfast and bipartisan support of the United States to Israel’s security than the unprecedented Memoranda of Understanding on security assistance signed by successive US administrations over the last few decades…”

The declaration made it clear to have the American pledge to protect Israel no matter what, including against its regional foes such as Iran, Hezbollah and Hamas: “Integral to this pledge is the commitment never to allow Iran to acquire a nuclear weapon, and that [the US] is prepared to use all elements of its national power to ensure that outcome.”

The sixth assertion is that the relation between the two sides is not only Israel’s need, but America’s as well. This was affirmed more than once in the declaration. “…strategic commitments that are vitally important to the national security of the United States itself,” for example, and “…the United States considers Israel’s security essential to US interests…” Indeed, as we have seen in the document, the US is definitely of vital importance to Israel, yet nobody has ever explained why Israel is so important to the US.

The declaration reflected the Israeli need for persistent and sustainable US financial and technological support that represents a lifeline for the occupation state. It sought to reassure the Israeli public that American tax dollars will keep flowing in as it has over the past seven decades: “The United States strongly supports implementing the terms of the current historic $38 billion Memorandum of Understanding in full.” Washington promised an extra billion dollars as a bonus.

The need for American support in pressurising Arab and Muslim countries to accept Israel as an integral part of the region: “The United States is committed to continue playing an active role, including in the context of President Biden’s upcoming visit to Saudi Arabia, in building a robust regional architecture; to deepen the ties between Israel and all of its regional partners; to advance Israel’s regional integration over time; and to expand the circle of peace to include ever more Arab and Muslim States.”

The need for American support to integrate Israel in the international community, which was expressed in the context of the I2U2 initiative by Israel, the US, India and the UAE.

The need for US protection from NGOs which work to deliver justice to the Palestinian people and hold Israel accountable for its crimes and breeches of international law, especially but not exclusively the popular and entirely peaceful Boycott, Divestment and Sanctions (BDS) movement.

The need for America to act as a shield for Israel in international organisations and platforms, ready to label any attempt to question Israel about its crimes as anti-Semitism, bias and hatred.

The need for the US to promise that Israel will be allowed to keep all of the Arab territory that it has occupied and settled illegally, and that all American talk about the “two state solution” will be restricted to open-ended promises and a deliberately vague future.

The promise that America will help Israel in all fields, especially in technology, in the guise of “scientific and technological cooperation”.

The promise that Israeli passport holders will get special treatment by being included “in the US Visa Waiver Programme as soon as possible.”

Amazingly, the declaration is never tired of stressing that it is not only in favour of Israel, but also in the best interests of the United States, as well as “to the good of the Middle East and of the world.”
Source: Middle East Monitor