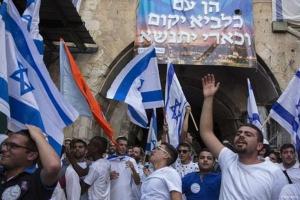 Some 500 Jewish families will live in occupied East Jerusalem within the next decade, Arieh King, the director of the Israel Land Fund organisation and a Jerusalem city councilman, announced yesterday.

“Sheikh Jarrah, or Shimon Hatzadik, is going through a revolution, and we will see its outcome in something like five years,” King told the Jerusalem Post.

There are currently five Jewish homes in the Sheikh Jarrah neighbourhood occupied Jerusalem, but King is encouraging Israeli Jews to settle in four other compounds in the city.

“In our next phase we plan to house families in two more compounds – one of 300 housing units and the other of 200 housing units. In about 10 years we will have in [two new settler sub-neighbourhoods of Sheikh Jarrah] Shimon Hatzadik and Nahalat Shimon, some 400, maybe 500 Jewish families.”

King’s organisation, Israel Land Fund aids Jews who allege ownership of Palestinian property in East Jerusalem prior to 1948, which under Israeli law, they can then claim as their own, evicting Palestinian owners. The Fund is currently aiding Israeli settlers trying to evict the Shamasna family from their home in the Sheikh Jarrah neighbourhood where they have lived for over 50 years.

The statement comes a month after Israeli occupying authorities confirmed plans to build 1,800 new settlements in the Sheikh Jarrah neighbourhood, the largest new settlement to be authorised in over a decade. Israel’s illegal settlement programme has been emboldened since the election of US President Donald Trump, who has failed to sufficiently condemn settler activity. Last week the US Ambassador to Israel also welcomed his daughter as she permanently moved to Israel to settle in occupied East Jerusalem.

All settlements in the occupied territories are illegal under international law and have been repeatedly condemned by the UN; Israel has ignored all resolutions.