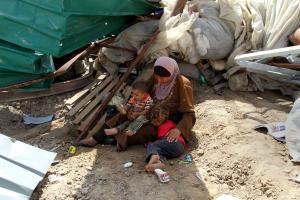 Israeli bulldozers razed lands in the village of Khirbet Umm al-Kheir in the southern occupied West Bank Hebron district on Thursday, in what locals said was an ongoing effort to expand a nearby illegal Karmiel settlement.

Rateb al-Jubour, coordinator of a local popular committee in southern Hebron, told Ma’an that Israeli forces and settlers accompanied the bulldozers during the incursion, and that the settlers assaulted an elderly Palestinian man before soldiers detained him for several hours.

Al-Jubour identified the man as Suleiman Eid al-Hathalin, 75, adding that al-Hathalin’s family, along with the Zein and Abu Hmeid families, own the land on which the illegal Karmiel settlement is built.

An Israeli army spokesperson said they were looking into reports.

Between 500,000 and 600,000 Israelis live in Jewish-only settlements across the occupied West Bank, including East Jerusalem, in violation of international law.

According to UN documentation, there were a total of 107 reported settler attacks against Palestinians and their properties in the West Bank, including East Jerusalem, in 2016, with 77 attacks being reported since the beginning of 2017.

Israeli authorities served indictments in only 8.2 per cent of cases of Israeli settlers committing anti-Palestinian crimes in the occupied West Bank in the past three years, according to Israeli NGO Yesh Din.