Kushner meets with Netanyahu, Abbas as confusion lingers over US peace efforts: 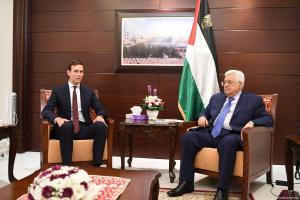 With expectations surrounding US peace efforts low among Palestinian leadership, Jared Kushner, US President Donald Trump’s son-in-law and senior advisor, has arrived in the region, where he and other members of a US delegation met with Israeli Prime Minister Benjamin Netanyahu and Palestinian President Mahmoud Abbas on Thursday.

Israeli news daily Haaretz reported that Kushner met with Netanyahu Thursday morning in Tel Aviv, where Kushner told the Israeli PM that Trump is “committed to finding a solution that will bring prosperity and peace” to all the region’s peoples.

Kushner is heading a delegation that includes US envoy for the peace process Jason Greenblatt, Deputy National Security Advisor Dina Powell and US Ambassador to Israel David Friedman, who has been vocal in his support for Israeli settlements and his unflinching support for the Israeli government.

“We highly appreciate President Trump’s efforts to strike a historic peace deal, a statement he repeated more than one time during our meetings in Washington, Riyadh and Bethlehem,” Abbas said at the start of his meeting with Kushner.

Kushner also reportedly delivered a message from Trump to Abbas, saying that Trump is “very optimistic” about peace prospects, and that he is “hopeful for a better future for all Palestinian people and Israeli people.”“We know that this delegation is working for peace, and we are working with it to achieve what President Trump has called a peace deal. We know that things are difficult and complicated, but there is nothing impossible with good efforts,” he said.

Following the meeting, the PA released an official statement, saying “the PA and the US delegation had a productive meeting focused on how to begin substantive Israeli-Palestinian peace talks. Both sides agreed to continue with the US-led conversations as the best way to reach a comprehensive peace deal.”

Reports emerged this week that during a meeting with the Israeli left-wing Meretz party, Abbas expressed his confusion regarding the US stance on Israel and Palestine, saying he “can’t understand” the Trump administration’s position on the conflict.

Abbas discussed previous meetings he had with US envoys, saying that while “he heard that they support a two-state solution to the conflict and a settlement construction freeze,” the officials have yet to state such demands publicly or to Netanyahu.