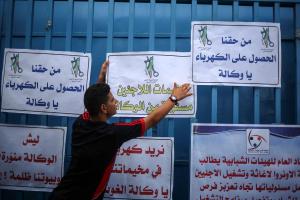 The UN has awarded $2.5 million in aid to the Gaza Strip as the besieged coastal enclave struggles with a water, fuel and healthcare crisis. The funds will be used to pay for generator fuel, medical equipment, solar panels and agricultural supplies to support the two million people blockaded by Israel.

“The serious decline in living conditions in Gaza continues,” said the UN Coordinator for Humanitarian Aid and Development Activities for the occupied Palestinian Territory, Robert Piper, in a press release.

Gaza residents are only receiving a maximum of four hours of electricity each day, making fresh water and sewage systems inoperable. An estimated 40 per cent of necessary drugs are also unavailable or will be depleted within a month, while patients requiring urgent treatment are prevented from leaving what has been called the world’s largest open air prison.

Last month, the UN issued an urgent call for international donors to provide $25 million in aid to ease conditions in the territory. So far, only 30 per cent of that amount has been raised.

Gaza has suffered from a lack of electricity since April due to ongoing disputes between the Hamas government and the Ramallah-based Palestinian Authority (PA). The crisis escalated last month as the last remaining power plant was shut down and the PA cut payments to Israel for the electricity it supplies to Gaza in the hope of pressuring Hamas to relinquish political control.

Last month, Palestinians protested at the UN Relief and Works Agency for Palestinian Refugees in the Near East (UNRWA), condemning the international organisation’s failure to stem the crisis. Many described the UN’s inaction as tacit approval of the Israeli blockade on Gaza. The head of the refugees’ committees in the north of Gaza, Basem Al-Kurd, called on UNRWA to carry out “the tasks for which it was founded back in 1949.”

The PA has also come under fierce criticism from human rights organisations for its role in the situation, including the cutting of funding to medical services agencies in Gaza. Earlier this month, Oxfam termed such tactics a “punishment on the entire nation” and called on the PA not to use civilians as a bargaining tool.

A report released by the UN last month raised concerns that the Gaza Strip is “de-developing” faster than anticipated, such that the 2020 deadline by which it was said that Gaza would be “unliveable” may have actually already arrived.