Rights group urges Saudi Arabia to halt deportation of half a million Ethiopians: 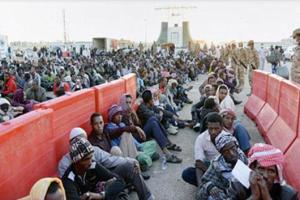 Human Rights Watch has urged Saudi Arabia to halt the deportation of nearly half a million Ethiopians after the government in Riyadh announced plans to expel migrants working or living illegally in the kingdom by yesterday.

According to the rights group, only 45,000 Ethiopians had registered with the Saudi government and returned home voluntarily as of June. The rest did not do so for several reasons, including a fear of the Ethiopian authorities.

The HRW statement stressed that while many Ethiopians go to Saudi Arabia for economic reasons, a large number of them flee from serious abuses at the hands of their government, especially in the Oromia region. The group warned that Ethiopian migrants may be at serious risk should they be forced to return home to face the persecution from which they fled. However, Saudi Arabia has no refugee law and no asylum system and is not a party to the UN Refugee Convention.

HRW added that Saudi Arabia has already deported 160,000 Ethiopians, many of whom were subjected to torture in their country after being held in detention camps.