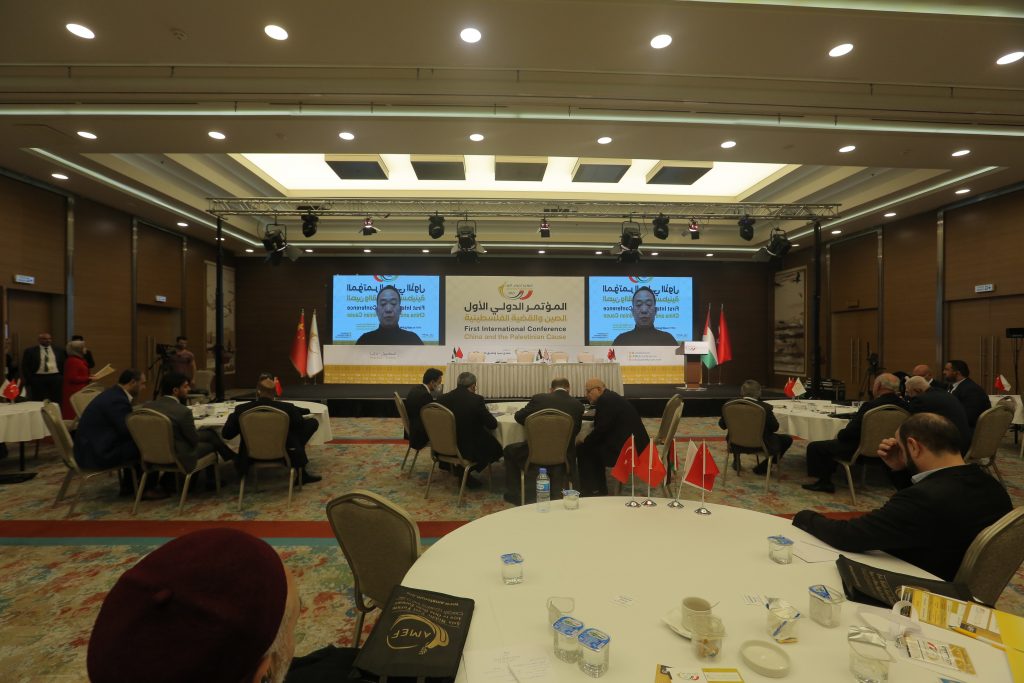 The Head of the Conference and Chairman of Asia Middle East Forum, Dr. Muhammad Makram Balawi, said that the conference aims to strengthen the Chinese-Palestinian relations in all fields, and to identify the vision and strategy of China and its development role at the level of West Asia, in addition to launching a dialogue between elite opinion and thought leaders. In the Arab world, the elite and friends of the Arab world are from China, without the need for an intermediary from the European-American research centers and the Arab media.

Balawi stressed, during his speech at the opening session of the conference, the need to establish direct dialogues between the Arab popular elites and the Chinese elites away from official relations and commitments that have their determinants, to form a public opinion that positively affects decision-making on the region and the Palestinian cause.

He noted that China’s restoration of its role will effectively contribute to the rise of the Asian continent in general, and give its people hope of liberation from colonial powers, which is very welcome in all countries of the continent, especially in Arab and Islamic countries, and from the only current occupation in this world, which is the Israeli occupation.

As for the Chairman of the Preparatory Committee for the Conference, Dr. Khaled Haniyeh, said that the conference came as a result of accumulated efforts and broad international participation in order to build an Asian dialogue platform between Asian peoples and countries and as a translation into the goals of strengthening and achieving Chinese interaction towards the Palestinian issue.

Haniyeh reviewed the conference’s sessions and objectives, noting that the sessions will be in the form of a Davos model to provide an opportunity for discussion and questions, and will coincide with another hall in China.

For his part, President of the Association of Parliamentarians for AlQuds and Al-Quds International Foundation, Sheikh Hamid bin Abdullah Al-Ahmar, affirmed that China, since before regaining its seat at the United Nations, has maintained positions in support of the Palestinian cause and the struggle of the Palestinian people to achieve their rights to liberation and independence, indicating that the Chinese Belt and Road Initiative project needs an environment free of occupation and safe, which contradicts the presence of the Israeli occupation, which undermines security in the region.

Al-Ahmar pointed out that the continuation of the Israeli occupation is an obstacle to achieving security in the region and the world, describing it as “the most serious danger to peace and security and an obstacle in achieving human welfare.”

He stressed that achieving justice and security for peoples requires exerting more efforts and pressure in order to dismantle the racist system, especially in the Palestinian territories, explaining that it has embodied, during the past years, an effective role in achieving the right and curbing extremism for the Israeli governments that move under cover and support from the American governments.

Al-Ahmar called for holding meetings with the leadership and representatives of the Chinese People’s Assembly and receiving them at the headquarters of the League, or visiting the capital, Beijing, to exchange views and build common perceptions to support the Palestinian people, defend their elected representatives from the attacks of the occupation forces, protect their values and sanctities, and address various issues of interest to the region.

In turn, the head of the Pakistan-China Institute, Mustafa Hyder Sayed, pointed out that Pakistan plays a major role in pressuring China to include Palestine in a tangible way within the Belt and Road Initiative, calling for coordination of efforts and the formation of an alliance by Arab and Islamic institutions, to pressure for Palestine to take a priority in Chinese foreign policy.

Sayed indicated that there is a growing concern among European countries about the unlimited US support for the inhumane Israeli policies, pointing out that there is an information war being waged to falsify the facts about Palestine, by the Israeli propaganda and its allies.

He stressed that the Palestine cause should be highlighted as a collective, humanitarian and fundamental concern, explaining that there is no reason why China should not take a strong stance towards Palestine, but this requires a coordinated effort to advance that.

Sayed added that serving the Palestinian cause and human rights requires a departure from narrow and personal interests and comfortable politics, pointing out that there is a growing concern among European countries about the unlimited US support for Israeli policies, which is something that must be invested in the interest of the Palestinian cause from institutions and parties interested in the issue.

As for the Head of the International Relations Office and Vice President of Hamas Abroad, Dr. Mousa Abu Marzook, he expressed his hope that China would take a larger and broader role in supporting the Palestinian people’s struggle to achieve their rights, adding that the Palestinian issue is a central issue in West Asia and the world.

Abu Marzouk stressed that Hamas supports everything that would bring the visions between any country and the Palestinian cause closer, calling for encircling the “roots of occupation sponsored by America and the colonial states in the region.”

He stressed the position of his movement’s refusal to interfere in the internal affairs of countries, adding, “But we hope for China to be far from the Israeli occupation, and the presence of the occupation will constitute a source of constant disturbance for China’s policy and its ambitious future plans because of the link between this American-sponsored occupation and the colonial power.”